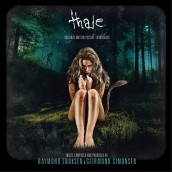 A Nordic she-creature gets a beautifully poetic score

From child vampires to giant trolls and Santa’s naked evil helpers, strange creatures have increasingly been appearing from the Nordic regions. THALE is an especially striking, coccyx-accented young woman to arrive from these hinterlands. And the mystery behind her is played for all of its beautiful eeriness by composers Raymond Enoksen and Geirmund Simonsen, musical creature hunters who’ve yielded stunning findings for this new wave of “fairy tale” horror pictures, whose originality is rapidly putting Hollywood’s genre films to shame.

The fiddle seems an indigenous instrument to this isolated, rustic lands of forest and snow, so it’s appropriate that THALE starts with one for its deceptively opening in “Our Story Begins” contrasting the sight of a heaving corpse cleaner with off-kilter electronic percussion. But when the team gets the job of wiping up an underground laboratory, Enoksen and Simonsen get down to more straight-laced and subtle matters with the appearance of the nude and mute THALE. For though very much a horror film, THALE is more about the way in which oddball outcasts communicate, with the very big McGuffin of finding out just how she got there, and who she, always playing in the background. The music takes an almost astonishing lyrical approach to the growing bond between these misfits, in much the same stylistic way that Johan Soderqvist used a piano and spare strings for the relationship between young boy and bloodsucker in LET THE RIGHT ONE IN. Here it’s female voices for a noble, if viciously protective she-creature sisterhood, calling out to their compatriot with whale song-like samples and hypnotically mournful strings, their looming, bestial presence given more claws with drum percussion. There’s also a bit of tender guitar to give just the hint of romance between human and beauteous “monster,” the score resonating with the fearsome power of a millennia-old legend come-to-life, as well as our ability to empathize with the enticingly unknowable.

THALE is one of those miraculous little foreign pictures, and scores that you want to tell the world about. And thanks to Movie Score Media’s Screamworks label, THALE shows how a “horror” score can be just as powerful as any drama where the music has to become the voice of a victimized female character that has none. Here’s hoping that Enoksen and Simonsen will soon get to speak their unique and transfixing language soon in English.

Clink on the link to Purchase the THALE soundtrack