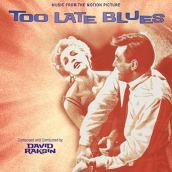 CD review: TOO LATE BLUES and THE WORLD OF SUZIE WONG soundtracks 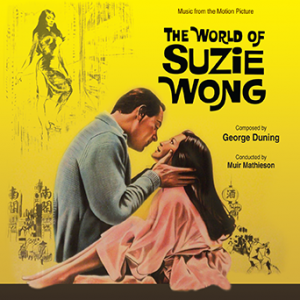 As pretty much the only label determinedly releasing scores from before 1965, if not 1960 at this point, Kritzerland gets extra points for concentrating on the jazz scores of the Mad Men era, not only releasing such stalwarts as Elmer Bernstein (THE RAT RACE), but also such equally worthy composers as Adolph Deutsch (THE APARTMENT) and Andre Previn (TWO FOR THE SEASAW). Now Kirtzerland has released two more wonderful scores that push past 70 minutes of listening with the era’s inimitable swing, one with an Asian accent, and the other packing the true improvisatory heart of the art form.

One thing that could be counted on actor John Cassavettes’ work as a filmmaker was his raw, uncompromising honesty, even when he went Hollywood for the first time with 1961s TOO LATE BLUES. Having made the groundbreaking independent film “Shadows” and directed several episodes of his show JOHNNY STACCATO, Cassavettes work was the cinematic equivalent of jazz, raw, smoke-filled and ultra cool. He’d inspire a hip combo of the lush studio “jazz” sound, and the real deal from David Raksin, the musician who’d had the ultimate noir romance hit with his theme for LAURA. While there’s no lack of swelling come-hither strings and an erotic sax for Stella Stevens’ femme fatale who leads Bobby Darrin’s jazzman astray with dreams of the big time,BLUES is more about the energy of a tight jazz ensemble than visiting a studio string session. You can practically cough on the smoke with the coffee house / Greenwich club sound of the Beat Generation that Raksin handles like the best sunglass-wearing cat. Ranging from solo piano to a bass and guitar licks and a swinging samba,TOO LATE BLUES hits just about every note of what was really going on in The Scene. Particularly striking is how Raksin uses female vocalese to play his main theme, making for one of that instrument’s most interesting uses outside of the STAR TREK opening title. While Raksin revels in the lush life, he honesty captures the dissatisfied, restless voice of BLUES‘ antihero with a hot-cool combo of edge and attitude that makes for the power of the era where jazz really came into its own as an art form, which makes this album a must for both collectors and fans of jazz’s movie music distillation.

1960s THE WORLD OF SUZIE WONG is a perfect follow-up to Kritzerland’s release of Franz Waxman’s MY GEISHA, a score full of charmingly symphonic Orientalisms. Here the focus switches from Japan to Hong Kong, where William Holden’s artist expatriate finds himself falling for Nancy Kwan’s hooker with a heart of gold – the kind of women westerners always try to turn to the straight and narrow in stories of this sort.

Having played sizzling symphonic eroticism for Holden in PICNIC, composer George Dunning takes a lighter, more romantic approach in the company of Suzie Wong Musical east meets west with delightfully expected results, mixing Asian instrumentation with a swooning orchestra as a relationship that starts with comic impossibility turns into more dramatically emotional stuff. Inflecting nearly every cue is the kind of wonderful theme work that’s very much part of parcel of the era. But what sets this spectacular-sounding SUZIE apart from being a lovely romantic travelogue is the fully Anglo jazz vibe of its source pieces, many of which show up on the album’s bonus tracks. There’s a brassy, big band swing to such standards as “Out of Nowhere,” and ”Sing You Sinners” while “I’m in the Mood for Love” gets a hilariously woozy Chinese riff, a musical Mai Tai hangover of the first order that’s among the many pleasures of Dunning’s den of sweet, Oriental sin.

Clink on the link to Purchase the TOO LATE BLUES soundtrack