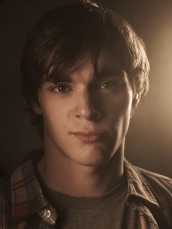 Exclusive Interview: RJ Mitte on the end of BREAKING BAD

The actor talks the end of the series and what's next 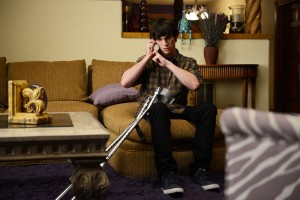 RJ Mitte (pronounced “Mitty”), who plays Walt’s teenaged son Walt Junior, has spent approximately one-third of his life in the role. Originally from Louisiana, Mitte has been an L.A.resident (when not on BREAKING BAD’s New Mexico location) for nine years. He started portraying Walt Junior when he was fourteen and he turns twenty-one this month..

Mitte says he came up with a certain amount of back story for the character, based on his own life experience. “Mostly with his CP,” says Mitte. “I grew up [in real life] dealing with cerebral palsy, and there’s a line that [Walt Junior] has in the first season when he comes up to Bryan [as Walt Senior]. He’s like, “Everything that I’ve been through,” and that was a big part of what I created in Walt Junior. People don’t realize, when you have a disability that actually affects your muscles, that you go through binding, and the binding process is not very pleasant. And that’s not just a daily process, that’s a nightly process. So when I was creating Walt Junior, I was thinking about everything that I want through with [limb] casting and binding and leg immobilizers and everything with that. So that was a big, big basis for Walt Junior.”

Walt Senior’s wife Skyler (Anna Gunn) has finally discovered just what Walt does for a living, but Walt Junior is still in the dark about his dad’s double life. At a sit-down interview during the Television Critics Association press tour, Mitte says he’d like to see this change before BREAKING BAD concludes.

RJ MITTE: I definitely want to see Walt Junior have the knowledge of what his father is doing. I think it’s a shame that it’s taken this long, but I love how the whole story has come together and how it’s all played out and I think eventually he has to know the man that his father has become. I think that’s inevitable, though.

ASSIGNMENT X: Walt and Skyler are very worked up about Walt Junior getting into college. Is that something Walt Junior actually cares about, or is that to please his parents at this point?

MITTE: I think that’s the least of his concerns at the moment. Trying to keep his family together, trying to keep what he has with his father, that’s his main concern. College is important, [but] I think most teenaged kids, college is the last thing they’re thinking about. I feel that he thinks college is important, but there’s so much that has happened to Junior and so much that has happened in general to all the characters, I think right now he’s just wanting to cling to whatever he can get ahold of. He wants his dad. When you’re in that type of position – how would you feel if your parents are pretty much divorced? And you have to keep this in mind – [the events of BREAKING BAD are] all within a couple of years, this is a short period of time. Can you imagine what the time was like for him, to go through a divorce, go through all this dealing with the parents and their separation, the fighting? College is definitely the last thing he’s really thinking about.

AX: In what we’ve seen Walt Junior go through so far, what has been the most exciting to play?

MITTE: I think the most exciting to play – well, Junior has had some really interesting scenes, and his scenes definitely push Bryan’s character forward and push his mom forward to a lot of the stuff [Walt Senior] wouldn’t be doing if it wasn’t for his children. I definitely think one of the big turning points for Walt Junior and the new light he saw his dad in was in the pilot, when [Walt Senior] came in and he puts this guy on the ground. It’s the first time you really see [Walt’s alter ego] Heisenberg and you see his new persona start taking effect. That’s when Walt Junior sees how much love his dad has for him, and how much he really admires his father. It’s interesting to see how all that takes effect.

MITTE: Yes and no. Working with Bryan as a director and as an actor – he’s an extraordinary guy. Anyone that knows what it’s like to be on a show and be the lead character and be the director while you’re doing the show, it’s incredible. It’s such a hard experience, it really is. It takes a truly talented man to do that. Not anyone can go do that. It takes such talent to be able to direct and act at the same time and what he brings to the camera and what he brings on and off the screen is astronomical and outstanding, it really is.

AX: In general, how do you like directors to work with you?

MITTE: I love for a director to make suggestions. I love to hear what they have to say. I like to know what their vision is for that episode and what I do is, I base my character on that vision and where they want it to go, and if they want it to go in a certain direction, I will switch my mindset into that direction. I like to work with directors. Yes, it is your character, but technically, it is their show.

AX: Have you had much input into your character over the years?

MITTE: Yeah, I think I’ve put a lot into Walt Junior. I definitely put a piece of myself into everything that I do. I did ad lib in the first season, but for the most part, everything’s in the script. Everything is all there. Every snippet, every action, it’s there, you don’t really need to.

AX: Do you have a favorite scene in BREAKING BAD, just as a viewer?

MITTE: Oh, yeah. I know this is horrible, but I love when the body falls through – I know that’s horrible, but that scene, every time I see it, it makes me laugh. I know it grosses a lot of people out, but when I see that body fall through the tub, that scene is hilarious. But there are so many moments in the show and there are so many moments that happen with our show – there’s not just one. There’s a big spectrum and there are so many intricate pieces that happen, and everything that comes together, it’s art, it really is. Vince and the writers – they’ve created something that nothing will ever compare [to].

AX: Is Walt Junior ending up where you expected him to end up when you started?

MITTE: Yes and no. To be completely honest, I never expected anything. This show, you can’t expect. I base everything off of basic decisions – what would you do in that situation? How would you behave in that situation? I think it was unpredictable and how it ended is how it should have ended, how it deserved to end. It’s good.

AX: The IMDB says you have several projects coming up …

MITTE: Yeah. I have one called HOUSE OF LAST THINGS, which will be airing soon. Also, I just shot a teaser for a movie called ZACK: THE THEORY OF EVERYTHING, which will be filmed in Paris where we shot the teaser. I shot a Hollywood Undead music video with a friend of mine and that was really fun and cool to be a part of that group. I was starring in it, I didn’t sing in it. It will be airing soon. And VEGAS is off the air now, but I was on VEGAS for a minute. We filmed [at their Santa Clarita studio period set]. We shot all over the casino floor. It was fun, it was a blast. I love period pieces and vintage cars and vintage clothes, and it was really cool.

And then I’m executive-producing a documentary that I’ve been working on for the past couple of years called VANISHED: THE TARA CALICO STORY, which is about a missing persons case. I know the family and she’s still missing today and it’s kind of just keeping her memory alive.

AX: Going forward, are you making the documentary because of the particular subject, or do you also see yourself producing going forward?

MITTE: I see a lot of stuff going forward, but mostly the documentary was just to help out. It’s sad that people can go missing and after a couple years, no one looks. People fade from memory, from this life, and no one should ever fade away – there are a couple of people that I would love to see fade away [laughs], but in general, no one should ever go through that. What’s worse than being lost and having no one looking for you? No one should have that.

AX: Is there a particular genre you’re hoping to get to work in?

MITTE: No. I love action – I’m happy to do anything for the most part. I really enjoy doing action scenes. I enjoy very physical scenes and very mental scenes and I think that’s always going to help out, enjoying those types of scenes. But I just love to work, I love to be busy, I love to create new characters. I like to challenge myself. So even if I don’t like something, if it’s amazing and I want to be a part of it, even if it’s not what I like, I want to be challenged, I like to have that challenging aspect to it.

AX: With BREAKING BAD, have you wrapped?

AX: Does the ending of BREAKING BAD feel like a graduation or does this feel like you’re moving to Siberia?

MITTE: A little bit of both. It feels kind of like a graduation, it feels like you’ve just got to find where you’re going now, I guess, and see where it takes you. But I’m excited. I’m so ready to see what people think of this ending. I’m ready for people to see it already. I can’t stress that enough, because of everything that happens, everything that comes together, everything that Vince and the writers have brought is just really incredible.

AX: What was your last day on set like?