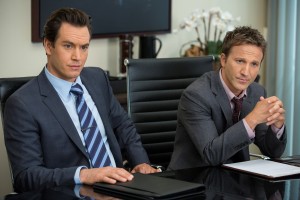 At a Beverly Hilton poolside party thrown by Turner for TNT, TBS and the Television Critics Association press tour, Gosselaar and Meyer are hanging out together, riffing off each other with the easy camaraderie they display on screen.

BRECKIN MEYER: I think we always said from the pilot, we hoped it would go as long, if not longer. I don’t think we’ve mapped out in our heads where we’d go, I just think that the premise of the show had the potential to be a long-running show, as long as it stayed fresh and stayed interesting.

MARK-PAUL GOSSELAAR: Yeah, I think any time you go into a show, you want it to go as long as possible, so there’s no way I would say, “Oh, I was expecting it to go only two seasons.” I think these characters are characters that we can build upon. We can actually go back on these characters as well, so there’s a lot more to give from these two guys.

AX: How has the addition of Heather Locklear been to the cast worked out?

MEYER: Great. Heather’s been really cool, she kind of fit right in – that sounds funny [laughs]. She was right at home with one of us, one of the guys right away. I think they wrote towards her strength and it was fun to have someone else to play off of. We love Malcolm, but it was also fun to have a female perspective on the show.

GOSSELAAR: She was brought on to play a particular role, to be the opposite of Malcolm McDowell’s character, and I think she accomplished that and the audience seems to enjoy her.

AX: As far as extracurricular projects, Breckin Meyer has produced two seasons so far of TBS’ MEN AT WORK …

GOSSELAAR: [joking] I’m waiting for him to hire me. I’m going to do craft service on his show. I’m really good at putting trays together.

MEYER: [joking] It’s between him and one other guy, but it’s looking good.

AX: How is juggling the time for being a producer on MEN AT WORK and a star of FRANKLIN & BASH?

MEYER: It’s good, because they’re all under the Turner umbrella. They make it real easy to make it possible. So they line up the schedule so I can focus on everything.

AX: In these first three seasons of FRANKLIN & BASH, do you guys have a favorite episode or a favorite scene?

GOSSELAAR: [joking] I like the scenes that he’s not in, that it’s just me. I think those are the ones that move along really well. That’s where America actually tunes in.

AX: And are you guys having more interactions with the writers now than you did when you started on the series, or did you have a great deal of input from the beginning?

GOSSELAAR: I think right from the beginning, we’ve always had interaction with the writers. I think now we have a little more – they come to us a little bit more and they trust that we’re making decisions based on the betterment of the show and not just being selfish actors wanting to look good. We want the show to look good.

AX: Is there anything else you guys would like to say about FRANKLIN & BASH right now?

GOSSELAAR: We’ll look into it.