now you see me soundtrack review 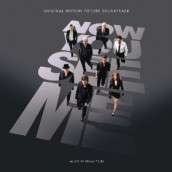 Brian Tyler comes up with jazzy fun for superheroes of illusion

Few Hollywood composers have nailed the rocking rhythm of the orchestral beat like Brian Tyler, whose action scores for such pictures as EAGLE EYE, FAST AND FURIOUS 6 and two EXPENDABLES are all about thematic propulsion, going like jet engines until they orgasmically plateau. But while Tyler’s the go-to guy for fast cars and muscular mayhem, the composer has rarely had the chance to use his rhythmic sound for a humorous action score, one where no one really gets hurt (though his yeoman work on IRON MAN 3 certainly didn’t lack for comedic riffs). Now Tyler’s testosterone at last gets put to winningly lightweight use for magical caper flick NOW YOU SEE ME, where playing a pretty much harmless trick of the eye shows that fun suspense can have just as much muscle, especially when it’s going for a MISSION IMPOSSIBLE-meets-Vegas vibe.

Much like the martini bachelor pad retro craze that re-hit the pop world a decade or so ago, film music is more than ever in love with the swinging spy-jazz-action sound for movies about big rip-offs, whether it’s TOWER HEIST or any given OCEANS flick. Tyler is a proper acolyte at the Schifrin altar for NOW YOU SEE ME, finding both homage and new vibrancy in his jams of fat brass, big strings, storming percussion and electric guitar that spells the kind of ego-driven characters who just know they’re not going to get caught. That’s right in tune with SEE’s all-knowing merry prankster-tricksters, joyfully blasting out their sense of complete confidence in making rubes of the feds. Beyond being old school with his ballsy swing, the composer incorporates newfangled techno rhythms, along with an orchestral rhumba that doesn’t make this so much a heist score as it does a delirious dance. But this would likely be all technique if Tyler didn’t have the thematic flair to back it up. And just about as always, the composer’s got a dynamically memorable motif for NOW YOU SEE ME. But in the end, this is just damn great musical popcorn fun by a composer who really knows every trick in the multiplex book, and is more than happy to pull off some new ones as well.

NOW YOU SEE ME also offers inconsequential, sometimes enjoyable pop fluff from Phoenix, Zedd and Galactic, whose tunes gives a proper Vegas ambience to Tyler’s score set. But leave it to the composer to outsmart them all with a “Spellbound” instrumental remix that switches out the jazz card for a techno spin on his main theme – even though even Tyler couldn’t pull off the ultimate hat trick of seeing one of his coolest scores get a deserved hardcopy release.