Skyler must choose between standing by Walt and his criminal empire or becoming the focal point of Hank’s case against him. 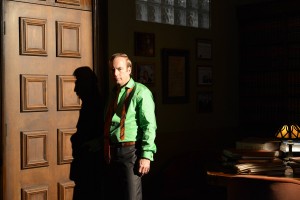 If there were any doubts as to where Skyler’s loyalties belong in the looming showdown between Walt and Hank, “Buried” removed them completely, and did so in a way that made you believe, with Skyler’s help, Walt could actually get away with all his crimes, (whatever getting away with it means when you’re dying of terminal cancer).  But just as one door has opened for Walt, another one is closing, as it now looks like Jesse’s loyalties might be a lot harder for him to secure.

“Buried” begins with Jesse in despair, having crashed his car into a swing set at a public park, as a neighbor cautiously gathers the stacks of blood money Jesse had been throwing haphazardly out of his car window.  This looks like the endgame for Jesse, who now seems to want to get caught, having tried everything else that might possibly allow him to dull the throb of his aching conscience, without success.

“Buried” actually doesn’t linger too long on Jesse’s angst, and immediately after leaving him we’re taken right back to Hank’s garage, where last episode’s electric confrontation between Walt and Hank has just concluded.  Once Walt’s out of the garage and back in his car, his Heisenberg mask slips and we see the panic on his face as he frantically calls Skyler to warn her that Hank is on to them.  He’s slightly too late, however, as his wife is already on the phone with Hank, and planning to meet him to discuss his new, terrible revelation.  Hank doesn’t know to what degree Skyler was the brains behind Walt’s money-laundering operation, and as such, her cutting a deal to save herself and her kids by testifying against him is now Walt’s greatest anxiety.

Hank blows his chance to trap Walt this way, (assuming he ever really had one).  At their meeting at a diner, Hank plays up how much he empathizes with Skyler’s suffering at the hands of her monstrous husband, but he’s too over-zealous at trying to get the details of that suffering out of her.  He also tells her that Walt’s cancer has returned, (which she hadn’t previously known), and tells her they have to make haste if they want to put Walt in jail before he dies.  None of this sits well with Skyler, and she refuses to talk to Hank without a lawyer.  She uses this as a pretense to make a huge scene and then rush out of the diner.

Walt doesn’t yet know the size of the bullet he’s just dodged, but he knows he still needs to cover his tracks.  He’s got Saul Goodman and his underlings, Kuby and Huell, picking up his mound of un-laundered cash from the storage locker where he and Skyler have been keeping it hidden.  Huell jokes about taking the whole pile to Mexico by themselves and Kuby reminds him that Heisenberg “hit ten guys in jail in 20 minutes.”  This was great coming on the heels of Walt’s panic-face after leaving Hank’s garage, because it reminds you how complicated Walt is.  Even though Walt actually did have ten guys murdered in jail, it’s still hard to believe that he’s either morally capable or technically competent enough to do it.  And yet he actually did it.  This contradiction is highlighted again when Walt and Saul discuss their predicament shortly after, and Saul asks if Walt’s thought about sending Hank “to Belize,” and Walt doesn’t know what he’s talking about.  Saul clarifies that “Belize” means “wherever Mike went to,” and adds that it’s “an option that has worked very well for you in the recent past.”  Walt won’t hear of this because Hank’s “family.”  He retorts, “Send him to Belize?  I oughta send you to Belize!” as though he was a sitcom character yukking it up with his wise-guy best buddy.   But of course they’re both talking about murder, and murder actually is an option for Walt and they both know it.  It’s also a good reminder that, while Saul is the comic relief character who’s perpetually delightful, the fact that he has such a high regard for assassination as a problem-solving device shows that he’s just as bad as Heisenberg in his own right.

The most intense scene in “Buried” comes when Marie, having just learned from Hank what Walt’s been up to, comes to Skyler’s house to convince her to help Hank make a case against her husband.  It’s never clear if either Hank or Marie could have gotten Skyler to turn on Walt anyway, but they both blow it in their efforts to convince her to join them.  When Marie finds out how long Skyler’s known about Walt’s criminality, she can’t resist slapping her sister and hysterically trying to remove Skyler’s daughter from the house.  The baby wails and shrieks as Skyler tries to block Marie from taking her out the door, and Hank has to play peacemaker and tell Marie she can’t actually take the Whites’ daughter away from them, to her great chagrin.

Meanwhile, Walt struggles to bury his barrels of cash out in the desert.  The chemotherapy leaves him too weak to do this, but he completes the task anyway, then memorizes the GPS coordinates of the site and buys a lottery ticket printed with those same numbers, which he puts on the fridge.  He gets home to find Skyler ready to talk about her experience with the Schraders, and learns that she didn’t rat him out.  But he’s so wrecked from digging in the sand all day that he collapses and hits his head.  After tending to his wounds and putting him to bed, Skyler tells Walt that she doesn’t think Hank has any real evidence against them, and that maybe their best bet is to wait this out.  With Walt suffering the effects of chemo, it seems clear that Skyler may now be the one calling the shots in their criminal partnership.

“Buried” also lets us know what happened to Declan and his associates after they took over Walt’s meth-cooking business.  Apparently they weren’t exactly an upgrade, and Lydia arrives at their secret underground meth lab to tell them that the purity of their product is not what it should be for her to be able to sell it to her associates in the Czech Republic.  She wants them to get Todd, who learned his trade directly from Heisenberg, to take over from their incompetent cook.  Declan isn’t having this, though, because Todd’s cooking skills are hit and miss, and because he doesn’t need to have a good product in order to make money from his customers.  And this is where we learn that Lydia isn’t just there to give him business advice.

Declan’s henchmen tell him they have a problem upstairs, and he leaves Lydia alone in the underground lab.  The way the resulting violence is depicted, with the camera never leaving Lydia as she covers her ears and cowers in the corner while muffled gunfire and screams come from above her, is masterful.  When the hatch to the lab is opened, and Todd appears above, apparently having recruited his Uncle Joe’s prison pals to ambush and kill Declan and his crew, we see what her real angle is, (and it’s clever enough that I can forgive her for coming up with a plan that’s dependant on Declan’s goons deciding to leave her unguarded in the bunker for some reason).  Also, having Lydia cover her eyes and tell Todd that she doesn’t want to see the carnage she’s just created is a nice touch.  Todd is eerily gracious and chivalrous for a stone-cold sociopath, and Lydia is continuing the show’s remarkable trend of creating sympathetic and/or charismatic villains, (taking over for Mike and Gus).  She’s fascinating because she willingly embraces the behavior of the crime lord, but will never accept it as her identity.  And even though she doesn’t seem to have the stomach for what she’s doing, she seems incapable of doing anything else.  It’s tempting to see her as a tragic figure, but really she’s just a villain, the same way Walt is, only without cancer as an excuse.  One can imagine her back-story is just as incredible as Walt’s, though, and assuming she survives this series, I’d be just as interested in seeing a Lydia-centered spin-off series as I would in seeing Saul Goodman get his own show.

“Buried” concludes with Hank and Marie discussing their next move.  Marie wants Hank to get the whole DEA involved in bringing down Walt, but Hank tells her that the minute he goes public with the fact that his brother-in-law is Heisenberg his career is over.  He’s got to have the goods on Walt first, and right now he doesn’t.  Fortunately for Hank, he finally goes back to work the next day and learns that the Albuquerque PD are holding Jesse Pinkman, who was discovered after his car crash with a huge sack of cash.  Hank convinces the officers to let him interview Jesse, and the final shot is of Hank entering the interview room, ready to make his pitch to Jesse, and offer him a chance to clear his conscience once and for all by bringing down his former mentor.

Things go from looking pretty bleak for Hank to looking bleak for Walt in the blink of an eye at the end, but what I took away from watching the completion of Skyler’s transformation from Walt’s wife to his prisoner and then back to his caregiver in this episode is that it’s never wise to count Walt out.  Skyler’s ultimate motivation for standing by her man can, and should be the subject of much debate.  She could be protecting her family and its reputation, she could be trying to deny her sister the satisfaction of always being able to look down on her, or she could be feeling so guilty about her participation in Walt’s crimes that accepting a plea deal would feel too dishonest.  Or it could be all of those and some other things as well.  But ultimately the show is called “Breaking Bad”, and because she’s staying on Team Walt, the term “Breaking Bad” now applies to Skyler’s character arc as much as it does to his.  Since virtually every character in the show is already compromised to some degree, and since no one has yet escaped from Walt’s evil unscathed, I suspect that, like Skyler, a few more of these characters, and maybe even all of them, might be breaking bad before it’s all said and done.