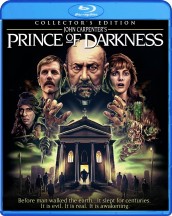 While John Carpenter’s directorial output over the last decade has been minimal, his earlier films including the new reissue PRINCE OF DARKNESS, continue to age quite gracefully and are continually revered and graced with lavish special editions.

He’s also just about the most remade film director in history with everything from HALLOWEEN, THE FOG, ASSAULT ON PRECINCT 13, THE THING and soon ESCAPE FROM NEW YORK all getting bigger budget re-imaginings, but often times missing the magic and simplicity Carpenter brought to the originals.

In some cases, movies like PRINCE OF DARKNESS and THEY LIVE are largely ignored for proper DVD and Blu-ray re-release and remastering, but thanks to Scream Factory, some of his lesser revered works by the masses are finally getting their long overdue re-evaluation.

Both PRINCE OF DARKNESS and THEY LIVE came at a time in Carpenter’s career where he was coming off the studio highs of BIG TROUBLE IN LITTLE CHINA, CHRISTINE and STARMAN. He wanted to get back to basics and do personal films with complete control and smaller budgets, which these two classics afforded him.

Both films were odd in many respects, but PRINCE OF DARKNESS while seeming to be the more commercial of the two, is actually the most challenging and daring.

It deals with the devil trying to find its way back into our world and it’s wrapped within the framework of a bunch of USC students brought into a situation beyond their reach. Each is a budding scientist in their own respect, but they soon find themselves dealing with a long-hidden canister containing pure evil that resides in a church in downtown Los Angeles.

There is power within the canister and it begins to take over the various scientists, infecting it with its evil and getting them to do its bidding.

Yet for all the conventional-nature of the synopsis, this film is fascinating in that it’s not about a bunch of stupid teenagers. It presents many scientific theories throughout and also gets into discussions about science versus religion, particularly between a priest played by Donald Pleasence and a professor played by Victory Wong.

The leads are Jameson Parker (a bit bland) as Brian Marsh who has a budding romance with Catherine (Lisa Blount). It’s the least interesting thing about the film, but the movie has so many other positives going for it, even if Parker doesn’t stand out, he doesn’t hurt the film either.

The effects are top notch, both in the gore category and the physical props (the green canister liquid is quite impressive) and the suspense beats are pure Carpenter. The movie even tackles the controversial notion that Jesus was an alien. Yes, it’s that kind of film.

The limitations of the budget are definitely here, but freed from studio interference, Carpenter, scripting under the pseudonym of Martin Quatermass really digs into the material and pushes the limits of the story while never pandering or simplifying things for the audience.

That’s probably why it remains one of his most underrated works. There’s also a timelessness about the film that remains. Very little of it feels dated, and the great supporting cast of characters really brings the film to life including Dennis Dun as Brian’s best friend (and the film’s occasional comic relief).

The new transfer is fantastic and really brings to life the rich color palette of the Director Of Photography Gary B. Kibbe’s work. And the score by Carpenter and longtime collaborator Alan Howarth still retains its spooky synthesizer punch.

The special features include a new talk with Alice Cooper who plays one of the homeless baddies in the movie, a nearly ten year old commentary by Carpenter and actor Peter Jason and the always entertaining Horror’s Hallowed Ground segment by Sean Dekker.

There are also three additional bonus features not listed on the box art. They include an interview with co-composer Howarth on creating the PRINCE OF DARKNESS score, an interview with actor and special effects guy Robert Grasmere on how he landed a plum role in the film and an the alternate TV opening to the film. The alternate opening is interesting, because it sets up the premise that the entire film is Brian’s dream. The re-edit is another example of how films were completely re-edited for television with no respect for the filmmakers original intent.

PRINCE OF DARKNESS is a solid Carpenter film and if you haven’t seen it, it’s worth checking out in this new Collector’s Edition. Strange, original and very creepy, it’s Carpenter pushing the horror boundaries and once again proving that he was always way ahead of his time.