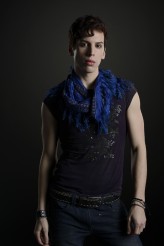 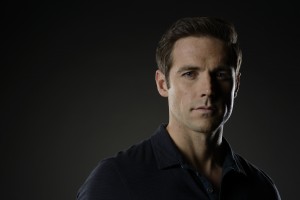 ORPHAN BLACK, created by Graeme Manson and John Fawcett, was a hit with audiences and critics alike when it its first ten-episode series ran on BBC America earlier this year. BBCA is now re-running ORPHAN BLACK Saturdays at 10 PM, with Season 2 due in April 2014. The extraordinarily versatile Tatiana Maslany stars – and stars – and stars – as a number of extremely dissimilar young women who discover that they are clones caught up in a sinister conspiracy.

Two men closely involved with Sarah, Tatiany’s primary character, are Felix, played by Jordan Gavaris, and Paul, played by Dylan Bruce. Bruce is a native of Vancouver, with previous credits that include the 2005 24 spinoff 24: THE CONSPIRACY, AS THE WORLD TURNS and the series THE BAY. Gavaris, who hails from Ontario, Canada, where ORPHAN BLACK is produced, previously starred in the series UNNATURAL HISTORY. The two actors are about to head back to Canada, but have enough time for a brief chat about ORPHAN BLACK.

ASSIGNMENT X: Can you talk about your characters?

DYLAN BRUCE: I am a human who was involved with a clone, and this clone in the trailer commits suicide at the very beginning of the teaser, jumps in front of the train, and Sarah, played by Tatiana, a streetwise chameleon, sees her do that, assumes her identity, and I am the woman-that-committed-suicide’s boyfriend, so she is now assuming her life.

BRUCE: I don’t know the Cliff Notes version of that.

AX: What’s it like playing off of Tatiana Maslany, as she’s playing a lot of different characters?

GAVARIS: Half the time, you don’t even remember who you’re talking to. She goes into the makeup trailer after one scene, and you’ve been talking to Clone Number One, and then she walks out and it’s a completely different person, and you’re trying to remember who in the world it is you’re supposed to be performing the scene with.

BRUCE: And it’s cool – she has a different walk for each character, too. She’s got her little strut going on for a certain character. I know who she’s getting ready to go and play. So it’s a fun experience to watch her go through.

AX: How much do you know about where the story is headed?

AX: How far ahead do you get the scripts? 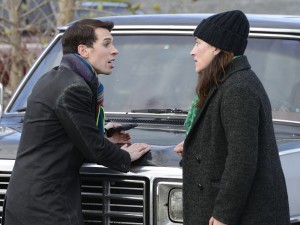 BRUCE: We get it Monday, the finished version.

GAVARIS: We basically get it before we’re about to start shooting, which is unheard-of in film and television. Everything is kept under lock and key.

BRUCE: Lock and key, yeah. Which is kind of fun – it keeps us guessing. And we can’t make too many bold choices.

AX: What would you most like people to know about ORPHAN BLACK?

GAVARIS: There’s a lot of nudity.

GAVARIS: It’s new. And I know that gets tossed around a lot in film and television, but this is something that’s new, it’s dangerous, it’s unapologetic, we do not apologize for being vulgar and dirty and creepy and dangerous, so come down the rabbit hole with us, and you’ll be in Wonderland.

BRUCE: And it’s the kind of sci-fi show that’s prevalent, because cloning is prevalent these days. It’s a real thing that’s probably happening, so it makes us a real sci-fi show.