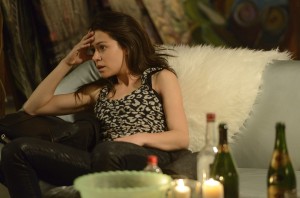 In ORPHAN BLACK, Saturdays on BBC America at 9 PM, Tatiana Maslany plays Sarah, a born survivor who adopts the identity of Beth, a Sarah lookalike who commits suicide while Sarah is watching. Then Sarah finds out that she and Beth are clones. Moreover, they’re not the only ones, and somebody is trying to kill all of them.

Maslany, a native of Saskatchewan, Canada, has an impressive film and television resume, with roles in features including THE VOW and DIARY OF THE DEAD and series regular gigs in shows that include INSTANT STAR, HEARTLAND and WORLD WITHOUT END. Speaking at the Television Critics Association press tour about her multiple roles on ORPHAN BLACK, Maslany seems quite happy to be professionally cloning around.

ASSIGNMENT X: Is it enjoyable to play different characters within the same project?

TATIANA MASLANY: I think it is, yeah. I’ve never done this before, and never to this degree.

AX: How many iterations of Sarah are there?

MASLANY: I can’t divulge that. There’s an unraveling, for sure.

AX: How do you differentiate the characters? Does the script do it for you, or is a lot left up to you as an actress?

MASLANY: There’s loads in the script. Graeme [Manson, who created ORPHAN BLACK with John Fawcett] is great with characters; he built some beautiful, complex, specific characters. A lot of it is right in the script, but for me, it’s also working with the hair and makeup team, who are complete artists in their own right. They bring so much aesthetically to these characters, which then gives me so much to work with. I look at myself in the mirror and it’s a totally different look. I get to work with a dialect coach who helps me through different dialects for the characters. And it’s a lot about the world view of these people. The way that you see the world means you’re going to move differently through that world.

For me, [getting to play a number of different characters] is the greatest gift ever, because I get to go back to when I was a kid, like you’re playing with your friends, and your friends are suddenly cops, then you’re a robber. Then your friends are dinosaurs, you’re a dinosaur, too. There’s no self-consciousness, there’s no judgment. [Self-consciousness about looking silly during play] is an adult thing, right? And it’s socially unacceptable to believe like that. I’ve done a lot of acting classes, and honestly, that’s the thing that I think I struggle with the most, is letting go and being free, because we all want control, we all want to know what the end result is going to look like, we don’t want to go through the messy thing of making mistakes and looking like a fool. As an actor, I think the biggest joy is to be able to play like a child with that openness and with that immediate, “You know what? Yeah, I am this person. I’m a totally different person.” And it’s how I move around and it’s how I speak, how fast I move, how slowly I move. I work with animal work [imagining oneself as a particular animal] a lot, so I’m thinking what animal this person is … 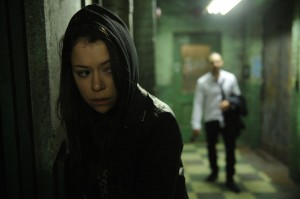 AX: What animal is Sarah?

MASLANY: Sarah is a few different animals, but she’s mostly like a mother lion. There’s a groundedness to her, there’s a ferocity to her, there’s a stillness, but with great aggression in it as well. And a fearsome protective mother thing. So there are loads of levels to it.

AX: Before doing ORPHAN BLACK, did you have any preconceptions about clones?

MASLANY: I guess I never really did. The science aspect of it I feel a little bit disconnected from myself, just because I sort of see it more like Graeme was saying, as an identity thing, us reflected in other people, different versions of ourselves. So for me, it’s less about the fact that they’re clones and it’s more about the fact that they’re struggling with their world being fake, or their world being not theirs, or them not knowing where they come from, or them not having a family or parents or not knowing their parents – like Sarah doesn’t know who her family is. So there inherently is a great deal of difficulty in knowing who you are and being the person you are and trusting people, because you don’t have that inherent trust that you have when you grow up with a really loving family. You move differently through the world when you feel supported or when you feel part of something. So I think, interestingly, what the clones actually give [Sarah] is a place that she belongs.