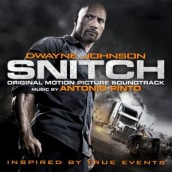 Antonio Pinto smells what The Rock is cooking

When many busy, burly action stars are content to make the same mediocre film over and over again, props should go to The Rock for doing something different with his action vehicles, interesting choices that have resulted in such atypical genre scores with a range that’s gone from Harry Gregson-Williams’ wacky Rain Forest score for THE RUNDOWN to Clint Mansell’s angered rock in FASTER. But what makes SNITCH‘s score so interesting is that it doesn’t feel like an “action” score at all, but rather an anguished drama, with an electric violin becoming a tortuously drawn lament. That’s particularly appropriate for one of Johnson’s best-performed characters, that of an absentee truck-driving dad who risks life and limb setting up for the narco trade to help his imprisoned son. Composer Antonio Pinto certainly knows something about the wages of the drug war.

Having received Hollywood’s notice with the score to CITY OF GOD, Pinto gives a true soulfulness to “Snitch’s” suspense, helping the pained emotions with poetic strings, and the dangerous momentum with bubbling percussion, dark rock chords and eerie Latin-inflected samples. All make SNITCH play like a modern noir western that packs an entrancing sense of doom. But just when you might think that SNITCH might be all foreboding build-up, Pinto unleashes a “Truck Fight” that’s all about grindingly metallic strings, reversed samples, a shamanic voice and screeching hits. It’s one of the most unusual action cues to be heard in a pump-shotgun film, but then SNITCH is all about the more interesting, mostly subtle musical roads usually not taken, especially with what The Rock is now cooking up.

Clink on the link to buy the SNITCH soundtrack

TCA 2011 News: PAN AM producer/director talk about how the 1960s set s...
Exclusive Interview: MEN AT WORK star Adam Busch on Season 3 of the TB...
TV Review: DANCING WITH THE STARS – Season 22 – Week 1 - Season Premie...
Movie Review: A PLACE AMONG THE DEAD