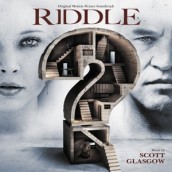 Having gone from the anime world of ROBOTECH to consistently produce impressive orchestral scores for such smaller genre films as HACK! THE GENE GENERATION and LO, Scott Glasgow goes down a Herrmann-esque road to solve the RIDDLE of a Pennsylvania town, wherein a woman’s search for her missing brother will of course unlock dark secrets that once A-list actors would rather stay buried. But if it’s a job for any indie-centric composer to make their projects seem bigger, Glasgow again shows that he’s capable of taking on far bigger thrillers with his talent for intriguing melody.

With the Bratislava players giving an impressive Hollywood polish to their exceptionally well-performed string sound, Glasgow captures a brooding, hypnotic tension for his sleek suspenseful work. Impressively sinister themes gradually unwrap the darker forces at play, with child-like bells and achingly beautiful solos for the violin and piano doing much to convey a feminine sense of jeopardy. RIDDLE also benefits from its always-eerie build for alternately soft and rhythmic strings, keeping the melodic shivers on high until all hell must of course break loose for the payoff. In the end, there’s no mystery as to why Varese Sarabande has given RIDDLE entry into its limited edition hall of fame as a worthy spotlight for Glasgow’s menacing talents.

Clink on the link to buy the RIDDLE soundtrack