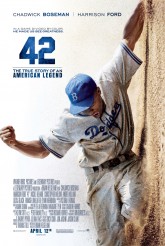 Most sports films have to reach a little if they want to be more than character and/or game studies. Many of them are successful, even inspirational, stories of team spirit or friendship or romance or competitiveness, but even a film like INVICTUS, which wove the World Cup football game into the end of apartheid inSouth Africa, seemed to be perhaps over-emphasizing the impact of sports on the larger social issue.This isn’t the case with 42, which dramatizes Jackie Robinson’s 1947 entry into Major League Baseball.

Even people who know practically nothing about baseball have heard of Robinson, the first African-American to play in the until-then all-white majors. 42 is Robinson’s jersey number; it speaks volumes that the number was retired by all baseball teams once Robinson left the game – except for once a year, on Jackie Robinson Day, when all players where a Number 42 jersey.

42 writer/director Brian Helgeland doesn’t look around much at what else Robinson may have affected besides baseball, because he’s got plenty on his hands showing us the impact Robinson had on the game and the other players, and how having to break social ground in the face of hate-filled opposition had a profound effect on Robinson. We see enough in the film to infer how all of this affected the larger world.

Whatever embellishments or dramatic flourishes Helgeland has used in his storytelling, it is a matter of historical fact that Brooklyn Dodgers president and general manager Branch Rickey (Harrison Ford) was determined to integrate the sport of baseball and sought out a player from what was then called the Negro League. Rickey needed not only a great ballplayer, but one who was tough enough to withstand the storm of abuse coming his way, yet had sufficient forbearance to avoid breaking his bat over somebody’s head.

Rickey finds his player in Robinson (Chadwick Boseman), who is enthused about even playing on the Dodgers’ Montrealfarm team. We know he’s going to make it to the majors, but what he faces on the way and once he’s there is enough to create genuine outrage in the heart of even the most blasé filmgoer. In one scene, Philadelphia Phillies team manager Ben Chapman (a fearless Alan Tudyk) relentlessly taunts Robinson on the field, seeming to utter the N word more times in approximately five minutes than Quentin Tarantino’s characters did in the entirety of DJANGO UNCHAINED. It becomes cumulatively horrific that someone could and did get away with this, and that someone would revel in feeling and expressing this kind of hatred and contempt. Plenty of movies have racially-charged confrontations that have far worse consequences – violence, death, genocide – but seeing it in the middle of something as presumably wholesome as a baseball game, with a character who knows he can’t respond, brings it home in a way that larger-than-life situations don’t.

The fact that Robinson didn’t publicly lose his temper – 42 has him losing it in private – is a testament to the man’s drive and self-control. Coleman gives Robinson great fortitude without turning him into a saint – there is nothing beatific about him. Coleman’s Robinson is wary with everyone except his wife Rachel (a charming and period-perfect Nicole Beharie) and at times gives us a towering rage hidden within a neutral tone of voice and polite expression.

On the other hand, Coleman gives Robinson a wonderful confidence that (at least in this movie) never swells into egotism. Jackie Robinson is up to playing baseball with the best and he knows it; he’s neither neurotic nor gloating, but just happy about his gifts. Boseman’s performance is entirely human, which makes it very respectful.

Ford looks very much like he’s reveling in Rickey’s growly, expansive persona; there are times he seems to be channeling Walter Matthau. The script gives him some great one-liners and Ford makes the most of them. When Rickey at last explains what, besides the obvious financial incentives, motivated him to bring Robinson to the major league, Ford gives the man’s reflections a gentle honesty. We believe him because it not only makes intellectual sense – Rickey had to have powerful motivation for wanting to end segregation where he could – but because Ford puts it forth so simply and cleanly.

The cinematography by Don Burgess and the production design by Richard Hoover work together to create a handsome look and an immersive period atmosphere that supports the action without being distracting.

There are some predictable beats in 42 and some on the nose dialogue, especially near the start. However, Helgeland and his impressive cast overall succeed in giving us a movie that is engrossing, entertaining and makes us genuinely ponder what we might do in Robinson’s position. 42 explains eloquently how and why Jackie Robinson became an enduring American hero, with extraordinary baseball prowess perhaps the least notable of his accomplishments.