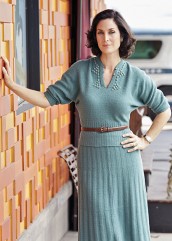 The actress talks about what brought her back to TV 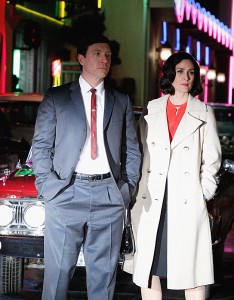 On VEGAS, CBS Friday nights at 9 PM, it’s 1960 and the Mob and glamour are both hitting town. This is a problem for rancher-turned-sheriff Ralph Lamb (Dennis Quaid), who in turn is making life a little rough forChicago businessman/casino owner Vincent Savino (Michael Chiklis). Carrie-Anne Moss’ character Katherine O’Connell keeps tabs on both men, though her relationship with Lamb is considerably less adversarial than her encounters with Savino.

Canadian-born Moss will forever be revered by science-fiction fans for her portrayal of martial arts-savvy heroine Trinity in the three MATRIX films. Other feature credits include FIDO, DISTURBIA and Christopher Nolan’s early film MEMENTO. Although Moss’ early career included a lot of television (including, funnily enough, a series called MATRIX that had nothing to do with the movies), she was away from the medium for over a decade, until she did a guest arc on the final season of NBC’s CHUCK as freelance superspy Gertrude Verbanski.

ASSIGNMENT X: Was doing CHUCK sort of like sticking your toe back into the TV series pool?

CARRIE-ANNE MOSS: A little bit. I loved the show, I thought it was really funny and charming, I loved what they were doing, and it was sort of like, “What would that be like for me?” I had fun doing that.

AX: Was the Gertrude Verbanski character playing a little bit on your MATRIX image?

MOSS: Maybe a little bit. From their perspective, I’m sure. Not from mine, because it’s so far away.

AX: Well, Gertrude, like Trinity, was very cool and physical. VEGAS isn’t quite so physical for you. Are you going to miss that, or are you relieved to be able to walk in heels, without having to kick people in them?

AX: What appealed to you about VEGAS?

MOSS: The cast, the creators [Nicholas Pileggi and Greg Walker], the script, the network. Being part of something that can become like a family and be something that I can really stick with. I liked that. They’re continuing to write [Katherine] very smart, very strong. I was interested in the fact that she was a woman at this time and she’s not married and she doesn’t have kids. She came from Vegas, she went away, got educated, and she’s back to preserve this place that she grew up in that she loved, that is filled with nature and is now, in her mind, being corrupted by greed, which I feel about a lot of things. So I’m excited about playing this part.

AX: Before VEGAS, did you have any special interest in the Sixties and/or Vegas? 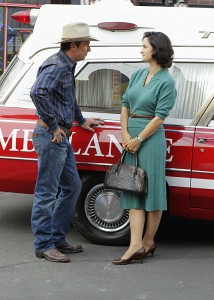 AX: Were you disappointed when production for VEGAS relocated from New Mexico to Santa Clarita?

MOSS: No. I always knew that [production was going to move. I live here [in the Los Angeles area], so it’s actually perfect.

AX: And do you have any other projects – feature films – that we should know about?

MOSS: I did a movie called COMPULSION, with Heather Graham [now in post-production]. And I have a small cameo in SILENT HILL: REVELATION.

AX: How do you like hard horror as a genre?

MOSS: It’s not my favorite, but I did really enjoy the first SILENT HILL. I didn’t think I’d like it, but I did. I loved it. I thought it was really, really interesting.

AX: To ask a way-back question, when you were doing MEMENTO, did you have a sense that Christopher Nolan was going to become such an influential filmmaker?

AX: Back to VEGAS, did you do any research into either the period or the legal issues – since your character is a district attorney – of the time?

MOSS: Yes, I did. And I’m continuing to do that. It’s ongoing, unfolding, so to speak.

AX: Did you go to the library, or watch documentaries …?

MOSS: A little of both, and open to it all. I went to the library, got some books, went online – we have the Internet now, which is pretty easy. [When] I went to the library, I talked to this older woman, and she said to me, “Oh, yeah, women didn’t really like women like us back then, women who are educated and hadn’t gone down that road [of stay-at-home wife].” And we take it all for granted now, that we can have children and husbands and work and be creative and have all of that, and it wasn’t like that then. So I’m interested in exploring that.