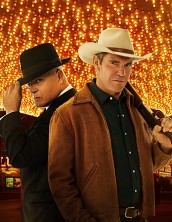 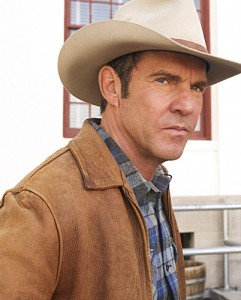 As network TV tries desperately to keep up the pace with cable dramas, every once and awhile a network show will give cable a run for its money.

This season it’s CBS with the exceptional VEGAS. From its feature film cast, its unconventionally storytelling ways and luscious good looks, this is one fabulous show and it can only get better from here.

Written by Greg Walker and GOOD FELLAS/CASINO scribe Nicholas Pileggi, VEGAS is set in 1960 and introduces us to Las Vegas rancher Ralph Lamb (Dennis Quaid) who is a bit of a hothead when it comes to his land. And when planes fly over his ranch and scare his livestock, he gets in fighting mode.

He also used to be one hell of an investigator in World War II according to the Mayor who knew him then, and decides to recruit him to help solve a murder in Las Vegas. His unconventional way of dealing with things is what makes him a natural choice and with the help of his brother (Jason O’Mara) and son (Taylor Handley), they start their investigation.

This leads them to a casino run by the powerful Vincent Savino (Michael Chiklis). Naturally these two are going to butt heads.

By episode’s end, everything is wrapped up in a tidy bow, but Lamb gets promoted from Deputy to Sheriff when the town’s actual sheriff turns up dead. All the more reason not to take the job, but it makes for great TV. It’s going to be even more authentic since the series is based on the true story of lawman Lamb.

Both Quaid and Chiklis elevate this series with their presence and they’re fantastic playing the various shades of grey their characters have to offer. It’s also great to see Carrie-Anne Moss as assistant direct attorney Katherine O’Connell. Clearly there’s some romantic tension between her and Lamb and it will only build as the series progresses.

VEGAS captures the 1960s perfectly and the idea of dealing with the wild west of Vegas, before it became Las Vegas is a plus all around.

The series does fall into a few pitfalls. It does feel at times like the network is trying to push it in the direction of a traditional CBS procedural where the main murder is solved before the episode is over, but I’m hoping VEGAS doesn’t try to become CSI: 1960 VEGAS and solve a murder each week. The show is so much more than a traditional standalone crime series and I think the more the series progresses, the more that element will go by the wayside in favor of more serialized storytelling which would benefit an epic feeling show of this nature.

VEGAS is off to a great start is hands down one of the best series of the new fall season.