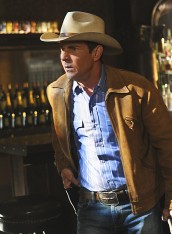 The actor sits down to chat about his series, the mob, working with Michael Chiklis, his favorite episode and more 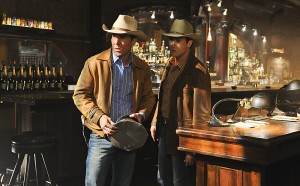 Houston, Texasnative Quaid has been a leading man in movies for decades, with his first major role as the dedicated cyclist in 1979’s BREAKING AWAY. Since then, a sampling of his major credits include real-life astronaut Gordon Cooper in THE RIGHT STUFF, fictional space explorer Willis Davidge in ENEMY MINE, singer Jerry Lee Lewis in GREAT BALLS OF FIRE, Doc Holliday in WYATT EARP and U.S. President Bill Clinton in the telefilm THE SPECIAL RELATIONSHIP.

VEGAS is Quaid’s first gig as a series regular. Inside the lavishly appointed and period perfect casino set, the actor talks about playing Lamb for what he hopes will be the long haul.

AX: Has VEGAS turned into what you expected it to turn into when you started?

DENNIS QUAID: Yeah, it really has, to tell you the truth. I was never interested in getting into a procedural show, per se. I was interested in telling a story, and this is a chance to tell a true story – Ralph Lamb inLas Vegas and the Mob clashing over a period of decades. He was Sheriff of Las Vegas from ’60 to ’78. The show started with a murder and it was a little bit more weighted on the procedural side, I think, when we started, because we were still getting to know the characters and get involved in their stories. And as their stories have unfolded and gotten more complicated, I think the weight has shifted and I’m really happy with where it’s going.

AX: Do you think it could evolve to the point where there are episodes where you aren’t investigating anything, where the characters are simply contending with one another?

QUAID: Yeah, it really feels that way, to tell you the truth, for me.

AX: Do you have a favorite episode in what we’ve seen so far – no spoilers?

QUAID: I really liked Episode Six. Referring to your first question about where the show is headed, I think that’s really where, for me, it really started to jell for Michael [Chiklis] and myself. I was out at my ranch, we had that head-to-head for half the show, and from there, I say it’s my favorite episode, but there have been other episodes that have come along that I’ve enjoyed. Plus the show has become more weighted.

AX: This is already the longest you’ve spent playing any one character, right?

QUAID: Yeah. And I’m looking forward to that. It gives you a chance to – I wouldn’t say “relax,” but take your time about letting a story unfold. And also, the character starts to come out on his own.

AX: Are you getting to find out more about Ralph than you normally would with a character you play for a shorter span of time?

QUAID: Oh, yeah, for sure. Because it’s over time and I imagine, hopefully, as the years go by – we’ll see – that it’s going to evolve. In a lot of ways, it’s like everything – it’s conscious at first, as far as creating the character, and then the character starts to evolve, just like in a film, just a very long film.

AX: How is playing the father and brother relationships?

QUAID: It’s gotten really interesting with Jason [O’Mara, who plays Ralph’s brother Jack] and I. Also, as we’ve gotten to really know each other, Jason and I, and Taylor [Handley, who plays Ralph’s son Dixon] and I, we’ve worked together every day – we’re there from seven in the morning until … So it really feels like family. And then with the stories that are going on, it’s starting to really feel like family in the sense that they’re getting dirtied up by things and there’s a lot of change and upheaval going on.

AX: How do you think both in the show and in life, Ralph Lamb managed to remain as law-abidingly “straight” as he was?

QUAID: [laughs] Who said that?

AX: I think you said that earlier. Didn’t you?

QUAID: No. I said he’s a very pure person as far as being a cowboy.

AX: You’ve said you’ve come to be friends with the real Ralph Lamb through the course of working on the show …

QUAID: We just have a really close relationship, and he’s about the age that my dad would be if he were still around and he kind of took me in, took me under his wing, and I just like being around him. It’s one of those relationships.

AX: Do you feel any sense of ownership with the sets yet?

QUAID: The sheriff’s office, I feel like it’s my trailer [laughs]. It really feels like my office at this point.

AX: The producers have said more Hollywood elements will be introduced to Las Vegas on VEGAS. Do you have any concerns about the Hollywood aspect being introduced, because the show is a product of Hollywood – are you worried about it being too self-referential?

QUAID: Well, Vegas was also really influenced by Hollywood – that’s what made Vegas as well, was Hollywood, as well as Havana being taken over by Castro and the Mob coming out here and looking to get into some sort of legitimate business.

AX: How much will Ralph on the show be affected by the Mob?

QUAID: Well, we can let time take care of that and do it slowly. Chiklis’ character Savino is becoming more legitimized and my side of the family is really kind of headed towards the other way [laughs], they get involved in all this corruption and power, and power corrupts.

AX: Are you following the Internet fandom for VEGAS at all?

QUAID: No, I’m kind of old school. I stay off the Internet as much as possible. There are many ways to communicate.