Home » Exclusive Interview: Michele Lee looks back on her career on PIONEERS OF TELEVISION 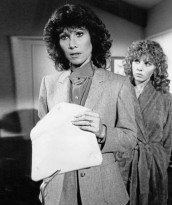 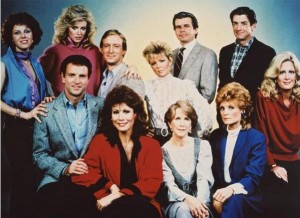 Nighttime soaps have made a roaring comeback – witness the success of GREY’S ANATOMY, REVENGE and SCANDAL – but this isn’t the first time the genre has been big. The late ‘70s and ‘80s were a heyday for the format, with KNOT’S LANDING starting its CBS run in 1979 and going fourteen seasons into 1993.

Los Angeles native Michele Lee, who played Karen MacKenzie for an epic 344 episodes on KNOT’S LANDING, is famous for many other things, including two Tony-nominated Broadway musical performances (in SEESAW and THE ALLERGIST’S WIFE), and films that include the screen adaptation of HOW TO SUCCEED IN BUSINESS WITHOUT REALLY TRYING (in a role she’d first played on stage) and THE LOVE BUG.

Lee is one of the subjects of Tuesday night’s Jan. 22 edition of PBS’s PIONEERS OF TELEVISION, “Primetime Soaps” (check local listings for airtime). At a party thrown by PBS for the press, she talks about her history with the TV medium.

AX: Do you consider yourself to be a pioneer of television?

MICHELE LEE: Aren’t I a little too young [laughs]? That’s not me, but I’m glad that people see what we did at the time that I did it as something that forged the continuing drama, and I think KNOT’S LANDING really honestly, all the shows, even our competition, L.A. LAW and HILL STREET BLUES, started telling continuing story arcs, because they [the networks] were so afraid of us [for being serialized], and subsequent to that, they all did. You watch any show that has a contained primary story, the A story – the B story is always the ongoing lives of the stars in them. And it happened when KNOT’S LANDING was there, and it has not stopped in every show.

LEE: I had no idea to start with that the show was going to be as enormous as it was. I didn’t even think that I would do the show when they first asked me to do it, because I didn’t understand the kind of show, and of course, it was continuing drama, as we affectionately call soap opera. And then they said to me, “Have you ever seen DALLAS? Well, watch it.” And I did and I said, “Ohh, now I get it.” And I did the show thinking that maybe, okay, it’ll be a year, two years maybe, no idea that it would be as enormous as it was, and there was good reason why it was.

AX: Do you want to do another series now?

LEE: I think I’ve stayed off of television too long. I purposely did. I don’t know what they’re planning to do, but it keeps coming to me all the time that the people who wanted KNOT’S LANDING want it on the air, with all these things.

AX: Well, they’ve got DALLAS – you could perhaps migrate onto that.

LEE: Well, I don’t think I could. They called KNOT’S LANDING the offshoot of it, but it wasn’t really – our show was written before DALLAS, and it was sold first. Our show was written as a separate, independent entity, and DALLAS was such a hit that the network said, “Why don’t we do your show” – to David Jacobs, the KNOT’S LANDING show [creator/producer, also of DALLAS], called something else at the time – “and put on one of the guys from DALLAS and make it a spin-off?” That’s what happened. But I’m not a Ewing DALLAS person. My best friend in it, Joan Van Ark, was married to the Ewing, and Donna Mills as Abby was part of that finagling thing and was aEwing, but I wasn’t, and except for being best friend and sister-in-law, there is no connection.

AX: Do people still recognize you for the movie THE LOVE BUG?

LEE: Yeah. It’s amazing. These little kids will come up to me, after their parents tell them, because they wouldn’t recognize me without my helmet, and their parents tell them that I was the person who was in Herbie, the first one. I said, “The one with the stick shift.”And they’re so in awe when they realize what it was, and then their parents show them THE LOVE BUG, the original one, and it’s like my little nephews, oh my God, I’m now a star, forget it.

AX: How do you feel about new media – material that is produced specifically for the Web?

LEE: You know what? It’s a new world and anything can happen. And I think it might not always be on a small screen, but you’ll be able to do all that new media on your television screen or large screen. I think it’s all coming in. There’s no stopping it.

AX: So would you have any interest in acting in it?

LEE: Yeah. Again, it has to do with the role you’re offered and how good the product is, what is it that they want you to do. I’m open to everything.

LEE: I’m going to be on this PBS show called PIONEERS OF TELEVISION, and I understand I’m quite wonderful in it.

AX: Do you know your fellow PIONEERS OF TELEVISION subjects?

LEE: All of them – actually, no. I would say the foreign contingent, no. But I knew Richard [Chamberlain], I knew Cloris [Leachman] – Cloris and I had worked together a few times – and I of course loved and adored Mr. [Louis] Gossett. Just incredible.

AX: Anything else we should know?

LEE: Come and see me wherever I am. I’m all over the country now doing my concerts. When I’m not doing anything else, I get as close to Broadway as I possibly can, which is standing on stage and doing my one-woman show and concerts. I go back to my old singing/acting-singing and the things that people knew me for before KNOT’S LANDING. [The one-woman show is] mine, but I do other things, obviously. I do stage still. I’d like to get back on the Broadway stage in a musical, but if that doesn’t happen, I do the closest thing to it.