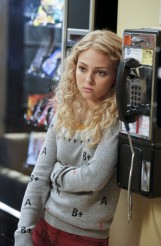 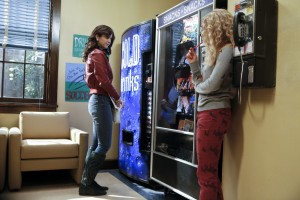 Sadly, it’s not getting any better. Week two of THE CARRIE DIARIES is as hopeless and lacking in authenticity as the show’s pilot last week.  To say this week’s episode “Lie with Me” did nothing to salvage the show’s integrity is like saying that Carrie Bradshaw kinda likes her Manolo Blahniks. Still puzzling more than annoying, the show is written across the board for a nonexistent persona. It’s too racy for kids and teens – the sexual innuendoes are through the roof not to mention that ones that are in our face. Adults will be bored with it’s lack of intrigue, rationale and let’s not forget every single adult in the show is a complete moron or a teen hating bitch.

This time around Carrie (AnnaSophia Robb) is grounded for lying to her dad (Matt Letscher) about going to an adult ritzy New York glamour party. So, when the object of her affection Sebastian (Austin Butler) calls asking her to go to a country club affair with him she has to decline. Well, no worries for him cause the girl who wishes to bed him is there and makes her moves on him. Not surprisingly Carrie’s best friend Jill (Ellen Wong) sees them and reports right back to Carrie. Is this exciting stuff or is this a rehash of every single teen show done since television was invented? Booorrring!

But that’s not the worst of the show’s offenses. All CARRIE characters in the show are either annoying, unscrupulous or complete dweebs. And the worst of them is Ms. Bradshaw herself who lies and then justifies it and then does it again. She even references Pinocchio when talking about the possibility of telling little fibs to gain something better in life. Is that what Pinocchio was all about? What is this show teaching us? Lie to get what you want and then worry about explaining it later? Plus, these aren’t little white lies. She lies to her boyfriend, her sister, her dad, her boss, her friends…is there anyone she is honest with? No, not even herself. When she narrates her little observations and anecdotes she seems to be telling a more interesting story than what’s actually being shown to us which means even we are being lied too! Maybe the producers should stop lying to themselves and leave THE CARRIE DIARIES on the bookshelves far away from the television.

Related: Exclusive Interview with FREEMA AGYEMAN on THE CARRIE DIARIES and DOCTOR WHO

Article:AnnaSophia Robb gives the scoop on THE CARRIE DIARIES