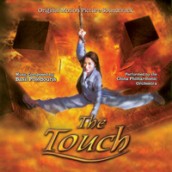 Once the composer of full-blooded orchestral epics like RED DAWN, STARSHIP TROOPERS and LONESOME DOVE, Basil Poledouris would be among a number of similarly talented, and unabashedly melodic orchestra-heavy composers whose careers went south for no other good reason other than the vagaries of Hollywood demand. It took a Chinese co-production to give Poledouris his last major work with this Michelle Yeoh martial arts adventure. But with this 20 million dollar, 2002 movie still unreleased on video in the United States (at least until the advent of YouTube), and its score album only available on a hard-to-find and exorbitantly priced import CD, THE TOUCH has seemed to be the stuff of legend. Thankfully just about ten years later, Buysoundtrax does justice to Poledouris’ always powerful TOUCH this terrific release on our shores. After his studio career began with BIG WEDNESDAY, Poledouris would go on to not only master the sound of a robust Western symphony, but also combine it with a world of ethnic rhythms and instruments on such scores as CONAN THE BARBARIAN, THE JUNGLE BOOK and FAREWELL TO THE KING. While that Kipling-esque WW2 adventure took place in Borneo, “The Touch” centered around Yeoh’s acrobatic female treasure hunter, a roguish accomplish and a brother-sister team of circus performers, all after an ancient Buddhist prize.

As foretold by its title, THE TOUCH wasn’t about Poledouris accompanying manly heroes wielding stockpiles of violent firepower, but of playing action in a graceful Asian key. There’s no musical chopsocky here, but luxuriously melodic strings, woodblock percussion, the poetic voice of the Erhu and a chorus among its wonders, all working together in a harmony that nonetheless doesn’t lack for Poledouris’ tell-tale muscular brass and electronic percussion. One majestic swell after the other gives the feeling of a composer pouring his soul out for appreciative filmmakers who knew what they were getting (in fact for China’s first English-language movie), with the bonus of a lovely title song (of course in Chinese) by Kelly Chen. For Poledouris admirers, hearing THE TOUCH‘s music given the power of the China Philharmonic Orchestra is nothing less than nirvana, especially with comprehensive liner notes by Randall D. Larson that reveal all about this curious soundtrack saga before Poledouris poignantly headed into the rising sun.