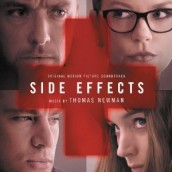 Though he’s Oscar-nominated for the fun, and very busy score to SKYFALL, Thomas Newman’s most interesting work has always lay in the minimal, electronically ethereal, world-rock sound that announced a truly unique musical voice in the 80s with the likes of THE LOST BOYS, LIGHT OF DAY and THOSE SECRETS – a TV soundtrack that also marked one of Varese Sarabande’s earliest specialty releases.

So it’s fitting that the label would provide a welcome return to Newman’s beautifully chilly sound for SIDE EFFECTS, a score that brings him back to musical basics with filmmaker Steven Soderbergh after funk of ERIN BROCKOVICH and the grand 40s orchestral approach of THE GOOD GERMAN. It’s arguably their most captivating collaboration for what’s threatened as Soderbergh’s last theatrical picture. Starting out as a dark satire about better living through chemistry, Newman uses guitar, a haunted female voice and an array of bell percussion to embody a medicated haze of anti-depressants.

Yet his approach is anything but a downer, instead using beautifully thematic melody to convey a dreamy, sleepwalking trip. Even as SIDE EFFECTS cleverly develops into a trip down Hitchcockian memory lane, Newman’s glistening, fairy tale bells (which evoke memories of Goblin’s SUSPIRIA) never settles on the typical, creating webs of enchantment that skirt between alt. rock and mesmerizing drones, eschewing an orchestra completely while losing none of that dramatic vibe for Soderbergh’s exceptionally surprising mystery. By the time that Newman ends the score with music far more befitting a Moroccan bazaar than a looney bin, one is musically medicated beyond caring for the reason why. It’s only the exotic, intoxicating groove that counts, as it always has for a composing voice that’s been on the good, experimental stuff from the start.

Clink on the link to buy SIDE EFFECTS soundtrack