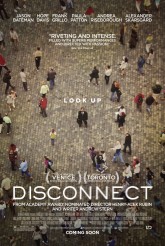 A well-paced, well-acted drama about some of the perils of the Internet age

DISCONNECT is a film that will provide a lot of satisfaction – and ammunition – for those afraid to take full advantage of social media on the computer. No one can catalogue everything that might go wrong with talking and trusting people one hasn’t met in person, but writer Andrew Stern and director Henry-Alex Rubin come up with a solid list of issues for a variety of characters. The biggies here are identity theft, emotional infidelity, CATFISH-style false identity, online bullying and of course that Internet staple, online adult entertainment – here offered by minors.

Married couple Derek (Alexander Skarsgard) and Cindy (Paula Patton) are coping, separately and not well, with the death of their infant son. Cindy finds some solace in an online grief support group, while Derek indulges in online gambling. Then they discover that some nameless thief has emptied their bank accounts. Derek and Cindy are galvanized by the possibility of confronting the cyber-robber, but the prospect also threatens to send Derek over the edge.

Young teens Jason (Colin Ford) and Frye (Aviad Bernstein, no relation to this reviewer) engage in a malicious and disgusting prank. When they see slightly older fellow high school student Ben (Jonah Bobo) observing them, Jason and Frye decide to “get him” by pretending to be a girl who likes his online profile. This escalates.

Local station news reporter Nina (Andrea Riseborough) believes she has found a good story with an online chat room, where patrons can pay to “go private” for a one on one chat with underage video phone sex performers. Nina talks to Kyle (Max Theriot), who is living in a house full of boys and girls in his line of work, all presided over by reassuring adult Harvey (Marc Jacobs). Nina wants to interview Kyle, who may not have plans for his future, but can see far enough ahead that he’s not sure if this is a good idea.

The plot components are all more or less connected, though the Nina/Kyle story is not tremendously tied into the others. It’s also the thread that in its important elements doesn’t need the Internet – while it deals with complicated ethical issues, most of these could be just as easily addressed if Nina were doing a conventional piece on prostitution. The aspect that makes it different – the customers don’t have physical access to the performers – doesn’t factor into what happens.

The bullying scenario and its effect on both Ben’s and Jason’s families is by turns infuriating, tragic and thought-provoking. Jason Bateman and Hope Davis, as Ben’s parents, and Frank Grillo, as Jason’s single dad, all give fluid, intense performances. Skarsgard is honest in both Derek’s silent self-loathing and his spark of delight when he gets Cindy engaged in their mission, and Patton is affecting in showing us that Cindy is blunted by sorrow. Riseborough and Theriot create an intriguing push/pull dynamic between them, where we can feel Nina’s ambivalence and Kyle’s yearning battling his wariness.

Director Rubin and writer Stern have created a way in which the actors can play the characters in unguarded moments, the camera on their faces as they type unobserved, with their written messages appearing as subtitles. This technique lets us see the difference in how these people are when they’re interacting face to face and when they’re alone, one of DISCONNECT’s more original and inviting qualities.

The film doesn’t cover a lot of new ground, though it will bolster the opinions of people who already mistrust online interaction. DISCONNECT has suspense, grace and ultimately a sense of connection, all of which make it worth seeing.