Home » bones review the cheat in the retreat 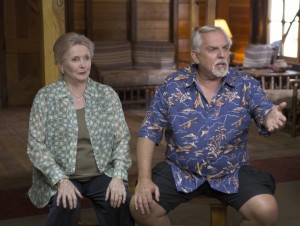 Sometimes a cigar is just a cigar, and sometimes BONES is just (mostly) a fun time. Such is the case with “The Cheat in the Retreat,” as Booth (David Boreanaz) and Brennan (Emily Deschanel) resurrect their Jersey Shore-esque couple Tony and Roxy to go undercover at a couples’ camp to investigate a murder.

Nketchi Okoro Carroll’s teleplay even gives a good reason for the masquerade – the retreat is on Native American land, where the FBI doesn’t have jurisdiction. Our couple go through the various exercises as part of their cover and turn out to be pretty solidly matched. They also find the perpetrators are an elderly pair (John Ratzenberger and Millicent Martin) who use these sorts of events to target attendees for burglary. One of the people at the retreat was there with his mistress, pretending she was his wife, while the actual wife was still at home – a bad surprise for burglars and a worse surprise for the straying spouse, who tried to stop the thieves and was killed as a result.

In a second B story, Sweets (John Francis Daley) is so frustrated by feeling useless that he ultimately decides to take a break.

Examining these in reverse order, it’s very possible that Daley, who has a highly successful career as a feature screenwriter, may need a real-life break to honor other work commitments. Then again, perhaps this is what it appears to be within the show: Sweets doing some soul-searching. There’s a minor suggestion within the episode that Sweets is jealous of Booth’s alpha male crime solver. If Sweets has a problem with that, he may actually need a time-out, as this would be like one of the Jeffersonian people being sad that Brennan is the smartest person in the lab.

As to Cam’s problem, we certainly understand her horror and embarrassment. Forget the shots of the severed, skinless head at the beginning of the episode – identity theft is much more stomach-churning. This development allows Taylora good range of emotion to play. It is curious, however, that with Hodgins going so far as to mention how homicidal and currently at-large hacker Pelant emptied Hodgins’ bank account, it doesn’t occur to anybody that Cam’s financial nightmare might be caused by Pelant. (You’d think someone would at least mention the possibility in passing.)

As to the main storyline, Deschanel and Boreanaz both appear to be having a blast, with Brennan getting to do a fake spiritual riff in her Jersey Shore persona and Booth running an obstacle course in a Puffy Man suit. Ratzenberger and Martin are both full of playfulness as the still-in-love thieves/killers. And it would be great if the producers would just go ahead and make the charismatic Vahdat a series regular.

For the most part, this is classic light BONES, gory, a little goofy and quite enjoyable.