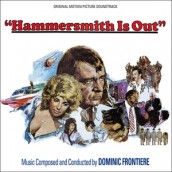 ©2013 Quartet Records
HAMMERSMITH IS OUT soundtrack

CD Review: HAMMERSMITH IS OUT and WOMAN TIMES SEVEN soundtracks

Quartet is in the groove for two wacky, retro killer comedy scores 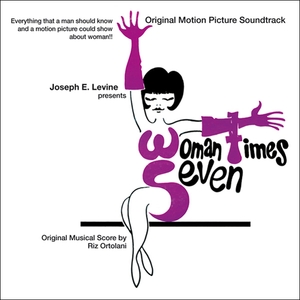 Quartet Records continues their mission of putting out swinging comedy scores from the 60s and 70s from Burt Bacharach’s CASINO ROYALE to John Addison’s THE AMOROUS ADVENTURES OF MOLL FLANDERS. These entries don’t get more deliciously hep than when they’re playing the devil, or the devil as a woman. 1972s HAMMERSMITH IS OUT is a full-on Faustian lark as Richard Burton’s satanic asylum inmate gains egress via Beau Bridges’ country bumpkin orderly – a pairing of ancient evil and American hayseed that allows Dominic Frontiere to go for a swinging combo of Baroque stylings with country twang.

Having played the supernatural straightforwardly in THE OUTER LIMITS, Frontiere goes hog wild in a jokey bachelor pad of jazz-organ swank, Shagadellic rock, swooningly romantic strings and harmonica, as ruled over by a playfully malefic theme for fuzz guitar and harpsichords that signals a with-it old scratch. But while its forked tongue is in lava lamp cheek, Frontiere’s score is fully in on its jokiness without being goofy about it, providing a genuinely cool listening experience with surprisingly good moments of dramatic scoring thrown into its overall, na-na-na grooviness, whose vocals threaten to break out into the BATMAN theme.

Riz Ortolani would be slightly more romantic than antic as he scored the sexy Shirley MacLaine vignettes of 1967s WOMAN TIMES SEVEN, his memorable theme taking on, and stripping off its dresses in the shades of swooning strings, romping Vegas brass, John Barry-ish sax jazz and oompa brass among its many delightful styles that never get tired for all of its starlet’s sensual workouts. A beyond-prolific Italian composer who was adept at such international productions as THE YELLOW ROLLS-ROYCE and THE BIGGEST BUNDLE OF THEM ALL. Ortolani brings out the multiple stories’ Neapolitan charm in spades (even if the movie’s set in France), casting a genuine romantic spell that’s all about the kind of full-hearted melody that continues to make these sometimes Shagadellic period scores irresistible.