The characters and their work techniques are welcome back, as is the end of the Bones/Booth proposal stress 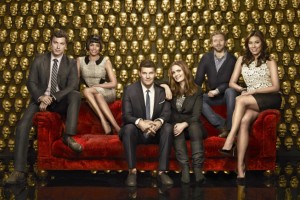 While BONES’ Season 9 opener, “The Secrets in the Proposal,” ends with Brennan (Emily Deschanel) still not knowing why Booth (David Boreanaz) feels they can’t get married yet, it does answer the question of how long the audience can deal with the stress of their estrangement. This turns about to be about half an episode. By the time Brennan learns enough to trust Booth again, even if she doesn’t yet know he’s being blackmailed to not marry her (and not tell her why) by the reprehensible at-large serial killer Pelant, we’re more than ready for the relationship to get back to normal. It’s okay for Brennan to sulk and Booth to stress, but it feels like we get the same scene a few times before Brennan winds up talking to Booth’s old Army buddy, current bar owner Aldo (Mather Zickel), and learns enough to have faith in her man again.

On the crime-solving front, the Jeffersonian team is confronted with human remains splattered throughout a hotel’s giant air conditioning fan, which leads to a few creative forensic techniques. There’s a great moment when Hodgins (TJ Thyne) surrounds the fan with a huge parachute-like contraption and turns it on, blowing much of the matter into the giant baggie. Booth is tipped by another old Army buddy (Freddie Prinze, Jr.), this one now in the CIA, that the murder has something to do with the Agency. The case turns out to involve a CIA “honey trap” for a contractor who may have dealings with the Chinese – the perpetrator is the boss of the CIA agent (Lucy Watson) who was romancing the contractor (the boss felt his employee was doing a little too much for her country in this instance).

There’s an attempt to keep the lab proceedings especially light to contrast with all the Brennan and Booth soul-searching, which provides some of the tone we expect from BONES, but can’t quite obliterate the “oh, just trust Booth already” sentiment stirred up by Brennan’s continued grouchiness in the face of Booth’s professions of devotion, marriage or not. He’s not the only one who’s relieved by the finale.

Zickel’s Aldo, a former military priest who was driven to give up his calling partly by having to listen to the confessions of then-sniper Booth, is likable and would be welcome back. Prinze appears so briefly that it seems evident that he’ll reappear, especially because a point is made of the fact that he feels he owes Booth a favor. Maybe the CIA will get involved with the hunt for Pelant; since he’s impersonated a foreign national, it seems like they could claim turf in any case.

In any event, “The Secrets in the Proposal” ends with Brennan and Booth reaffirming their commitment to each other, setting the stage for a new – ninth! – season of the BONES we know and enjoy.