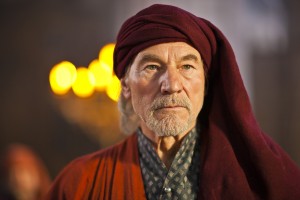 As for why these four specific plays are being brought together under one umbrella, GREAT PERFORMANCES executive producer David Horn says, “This epic miniseries was a concept created by Sam Mendes to bring a cinematic continuity to these separate history plays that examine the divine right of kings in medieval England.”

Along with Horn, Mendes and Mendes’ producing partner Pippa Harris, Gareth Neame is one of the executive producers of THE HOLLOW CROWN. The Englishman is a fourth-generation producer, following in the footsteps of great-grandfather Elwin Neame, grandfather Ronald Neame and father Christopher Neame. While Neame has been a professional television producer since 1996, his most successful project so far is arguably DOWNTON ABBEY, which resumes on the BBC in England September 22 and comes back to the U.S. on PBS’ MASTERPIECE on January 5, 2014.

Neame courteously makes himself available after a PBS panel for THE HOLLOW CROWN for the Television Critics Association to further discuss his work on the production.

ASSIGNMENT X: At what point in your life did you discover love for Shakespeare?

GARETH NEAME: I suppose it was a bit of a back-burner in one’s education in English. I did it through to university, but it was important that I point out that Tom [Hiddleston] is such a fine Shakespearean actor and all the actors we have in the films are versed, versed, versed in stuff like that – the directors as well. My perspective is very important. I’m a producer of popular television and I think it’s very interesting that the experience I brought to it, which is to go, “My goodness, these are so accessible, and what we can do in this day and age to film these things,” which couldn’t really be done twenty, thirty years ago on television, “we can now do that.” And making it, I realized how accessible these themes are, how completely compatible they are with all the different concerns that we have now – particularly on a sort of political and leadership level, we look at what’s happening in the world and in our own countries. I found that really fascinating. The main reason I got involved in putting the thing together and coming in to finance the thing was that I thought it was really impressive the BBC were going to try to do this, they had that ambition, and I really wanted to support it if I could.

AX: What is your specific producing role on THE HOLLOW CROWN?

NEAME: No. On this show, we’re [Neame and his production company, Carnival Film & Television] the co-producers. So essentially, we come in with part of the finance and we distribute the show internationally, but this is a different experience, say, from something like DOWNTON ABBEY, which we make on our own. This is one where Neal Street [Productions], which is Sam [Mendes] and Pippa [Harris], came to me saying, “Could you help us get these films made?” And because I have access to production finance and we have distribution, I made that decision – “We’ll come on board, we’ll put some money into the films.” And they had a commitment from the BBC and they had a principal commitment from GREAT PERFORMANCES from PBS, but that still wasn’t enough to get it made, so I came in [and] raised the money to come in for the final piece to put it all together.

AX: How do you get the money back – video sales?

AX: And doing the four films as one big project was Sam Mendes’ idea initially?

NEAME: Sam Mendes and his partner, Pippa Harris, they had the idea.

AX: Are the texts for the plays abridged?

NEAME: Of course, it’s a theatrical tradition, really, than any time a Shakespeare play is put on that that director will dramatize [edit] the text. It’s very rare that a complete text would be played. So what we’ve done with these films is fairly normal in the Shakespeare world.

AX: How do you handle producing THE HOLLOW CROWN differently than DOWNTON ABBEY, if you do?

NEAME: Well, it’s a completely, completely different piece of drama altogether, so the whole approach to it is very different. DOWNTON is an original script, isn’t it? We make it up as we make it and it’s all about the ongoing lives of those characters. This was the experience of taking a finished text from four hundred years ago and turning it into a film, so very, very different.

AX: So there’s no script input on this one.

AX: Apart from that, were there any notable production issues? For example, you’re shooting in a lot of historic locations. Did the people and/or organizations in charge of those locations welcome you because THE HOLLOW CROWN publicizes those locations, or did they charge huge location fees?

NEAME: I suspect there is a feeling of responsibility if you’re looking after some old church or cathedral … I suppose a door is open when you go in saying, “We’re making four of these extraordinary history plays, and we’re going to bring them to the screen.” If you are somebody who is a custodian of a cathedral or an ancient building or something, probably your mindset is going to be in tune with ours. I suppose there is some evidence throughout PBS’ output that there is an extraordinary connection in Britain and its entertainment between us and our past, and clearly, that’s what so many people in America get from all of the fiction that’s on BBC. You know, when I put on the TV in England, every evening there is some sort of program about people living in a Victorian house or eating Edwardian food – there is a real hunger.

And I’ve noticed it increase during my lifetime, actually, this connection with our past and our interest in the past. Because of all that, clearly, an awful lot of films and television dramas are made from our literary tradition. So there are strange doublet and hose that people wear, and big spears and spikes and shields. A lot of those things have to be manufactured, but a lot of it exists. And there is obviously a plethora of extraordinary talent in costume-making and art direction and all of these things that come out of decades of making big historical dramas. But that’s not to say it’s an easy feat. Neal Street[Harris and Mendes’ company], my producing partners, deserve all of the credit for having executed these films. Rupert Ryle-Hodges, who is the extraordinary producer on the ground [for HOLLOW CROWN], put it all together, and I promptly named him to produce the next season of DOWNTON ABBEY. So you find these good people and you keep ahold of them. But it was a huge challenge to make the four films, shot all over southern England through the winter.

AX: At the time that THE HOLLOW CROWN was planned and financed, was Tom Hiddleston already relatively famous for playing Loki in THOR and THE AVENGERS?

NEAME: Yes, I think there was a feeling that it was his time, and at the point I got involved, there was talk of Tom doing it, but that wasn’t confirmed.

AX: Was anybody else attached?

AX: THE WHITE QUEEN, which deals with the rise and fall of various English monarchs, is currently running in the U.S. on Starz. That story starts in 1464. Where do these Shakespearan histories fall in that timeline?

NEAME: I’ve seen very little of THE WHITE QUEEN, but that was the War of the Roses. We’re a bit earlier than that.

AX: Do you think THE HOLLOW CROWN will appeal to people who don’t consider themselves to be fans of Shakespeare?

NEAME: There is a fear amongst millions of people in the English-speaking world or wider that “Shakespeare isn’t for me,” or “It’s complicated,” or “I won’t understand the language.” And people get very put off by the language. I speak as somebody who’s put these films together, but with nothing like the Shakespearean background that our actors and directors have got. I mean, I used to watch episodes of WEST WING and not understand this very complex piece of White House precedent that they’re talking about from some presidency a hundred years ago. But when you just sat back and thought, “Well, I’m just going to watch the drama,” you realize that you do understand the relationships that are going on. You understand the family relationships and the politics and the power and the rivalries and what the disputes are over, because it is everything about humanity. So I really hope people will come to these films in an open-minded way, not thinking it’s like eating green vegetables and sort of good for you, but not terribly interesting. Because if you come to [the films] with an open mind, they are incredibly rich and rewarding, and incredibly open and accessible.