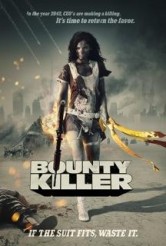 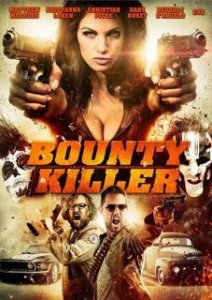 BOUNTY KILLER is an interesting film that combines a Wild West mentality mixed with MAD MAX type groups in a world that has been devastated by a war on society by huge corporations that now run the land.

Assignment X sat down to talk to Pitre about her role as Mary Death and working on BOUNTY KILLER.

ASSIGNMENT X: How did your involvement in BOUNTY KILLER come about?

CHRISTIAN PITRE: I did not have representation at the time and got called in for the short film for BOUNTY KILLER. I was determined to play this girl. I was very excited to play a strong female character so much so I took a real knife into the audition and it didn’t occur to me it might scare someone. I slayed it and I told them I was Mary Death. They showed me all these comic drawings they had done and I was really close to what they had in mind except she had long white hair before they met me. It is interesting because they showed me the audition tapes and getting to see the other side of the process was really cool. All the other girls were really good and incredibly athletic. But I think they could easily see I was Mary.

AX: So before BOUNTY KILLER did you have any fight training?

PITRE: I have never been in a fight in my life or have taken martial arts. When they cast me for the role and I met with the stunt coordinator, they had to make me look cool. He told me “Christian you are very easily going to pick this up and I will make you look bad ass on screen.” That gave me the confidence to do well in the on-the-job training I would receive.

AX: Obviously, Mary Death uses a ton of guns. If you had no fight training, what about gun training?

PITRE: I grew up with guns, just shooting off the back porch and such so this was much more of a natural thing for me. It’s funny we used actual guns during the shoot, so there was definitely some familiarity there.

AX: The whole MAD MAX theme is interesting mixed with sort of a GUNFIGHT AT THE OK CORRAL attitude, what was it like being in the sand the whole time?

PITRE: I loved the desert. If everything became apocalyptic, I would love it. I don’t sweat and I love the heat so it’s not a problem for me. We shot the film in Blue Cloud Ranch. It is this place where movies will come and build sets and then just leave them there. It’s a fun place because there are sets everywhere. [Director Henry Saine] would find these random places to shoot in. Like he found this airplane graveyard and thought it would look good. Since we shot the film in 18 days, we worked like a madman and the area was well suited for that.

AX: You are billed as this being your first feature. What did you do prior to BOUNTY KILLER? 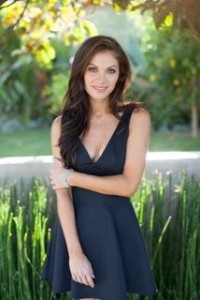 PITRE: Before I moved [to Hollywood] I worked in Nashville and not a lot of films go through Nashville but there are some and I scooped up anything I could. My husband and I got a lot of experience of being on a set and working every day doing movies. But this is my first introduction to the industry.

AX: In your personal life do you enjoy these types of action films or are more into other genres?

PITRE: I always enjoy action flicks and usually it’s something my husband would want to see. I love dramas and always thought I would be a dramatic actress but not after being involved in this and appreciating the stunts and everything, it is becoming one of my favorites. Eventually, I would love to go back and do a drama to showcase my acting ability but right now it is so much fun doing action.

AX: Now Mary Death has a fondness for cigars. Do you share that same fondness?

PITRE: [Laughs] I do not. We haven’t figured out yet where Mary gets those cigars either. It’s the apocalypse but she seems to have them everywhere. She just pulls them out of thin air it seems.