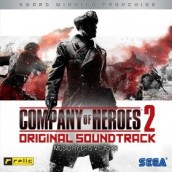 Imagine if RED DAWN‘s score was on the side of the Russkies, and you’ll get an idea of the powerful Mother Russia patriotism that fill’s Cris Velasco’s exceptional real time strategy game score campaign against the Nazi bastards on the Eastern front in COMPANY OF HEROES 2. You’d be hard pressed to think that Stalin himself didn’t commission this score from the prolific videogame composer whose excelled in the battles of GOD OF WAR 3, DARKSIDERS and WARHAMMER. Velasco’s march-or-die orders inspire a dynamite symphonic performance that salutes the valor of the snow-swept homeland, unleashing powerhouse broadsides of heroic, militaristic energy, replete with Soviet choral anthems and empathetic strings that cut to noble core of its soldiers. Blasting, breathless percussion conveys the tank-on-tank mayhem, while chilling strings evoke a war-wracked landscape of frozen doom.

Velasco certainly makes the Supreme Leader, not to mention Sergei Prokofiev and Basil Poledouris, very proud here. But set aside Red politics, and you’ve got a score that salutes the desperate heroism of any soldier fighting against a monolithic invading force. It’s music that delivers the joystick mashing goods as well as depicting a very real sense of sacrifice that cost its country millions of lives in combat that was anything but a game. Velasco’s terrific score wears that Medal of Honor proudly.

Clink on the link to Purchase Company of Heroes 2: Original Soundtrack