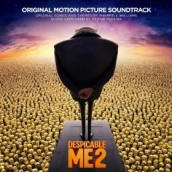 CD Review: DESPICABLE ME 2 and THE SMURFS 2 soundtracks 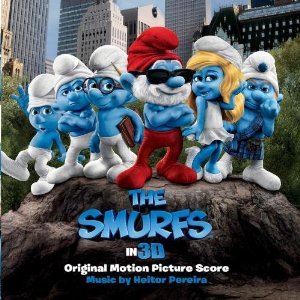 Perhaps there’s just a natural, festive spirit of his country’s carnival celebrations that’s in the musical genes of Brazilian composer Heitor Pereira. Rapidly making a name for himself in family-friendly scoring, Pereira’s work for the likes of CURIOUS GEORGE, BEVERLY HILLS CHIHUAHUA and THE LITTLE ENGINE THAT COULD comes across as being just plain “nice” in the most fun, melodic description of that word as possible – especially when dealing with a cartoon supervillain on the mend, or munchkins with playfully bad attitudes for two sequel scores that actually improve on Pereira’s original, bouncy work.

Having shown sympathy for Mr. Vengeance with his score for DESPICABLE ME, Pereira does a great job of continuing with a rambunctious, satirically sinister vibe for Gru that helps keep the edge in the character, even if he’s now determined to be the good guy. Going for the dark, retro jazzy brass suspense of Bondian spy music, the super-science electronic rhythms of secret weapons and the exclamatory orchestrations of world-conquering plans afoot, Pereira nails exactly why this unexpectedly wonderful series is a crossover hit – namely because it plays to both adult and kid sensibilities without being condescending to either, something especially tricky as the accordion-laced Gru tries to be a caring dad to a bunch of adorable orphans. Without making his approach cartoony, Pereira captures a seditiously sophisticated sweetness to DESPICABLE ME 2 that works equally well for tenderness, pokey lurking and comic evildoing, all with a catchy sense of rhythm, with particular fun to be found in Pereira’s raging Latin Luchador music for El Macho. Back as well is the funkily upbeat, Stevie Wonder-esque songs of Pharrell Williams. Full of the hand-clapping optimism, one can imagine Gru gleefully incinerating songs like “Just A Cloud Away,” “Happy” and “Fun, Fun, Fun,” which makes them all the more ironically enjoyable. It’s also impossible to resist the adorable, high-pitched gibberish of the Minions’ mangled takes on “I Swear” and “Y.M.C.A” making them easily the cutest high-pitched characters to achieve mass popularity since The Chipmunks.

The other big toy-generating franchise that Pereira is lucky enough to score (likely sans a cut of the merchandise) are those ever adorably annoying Smurfs, who are spun off into the “Naughties” this time out. But while many adults might even less merciful than Gargamel when confronted with by these bizarro versions of the Smurfs, the addition of these mutant elves prove to be another delightful playing ground for Pereira, who embodies these even more demented elves with music approximating the sound of broken-down music boxes, all while the Smurfs are given a nicer bell sound. And with its Parisian setting, Pereira is sure to have fun with the accordion in a complete different way than when that instrument’s applied to Gru. But while SMURFS 2 is tuned for a younger set than DESPICABLE ME’s, Pereira is perhaps even more cheerfully creative, and cartoony here, turning fights into Scottish jigs, using lots of blarting brass, of course with inappropriately sexy cat-calls for Smurfette. SMURFS 2 also impresses with set pieces or sorcerous choral action, and of course the judicious use of the original Smurf cartoon theme. Like DESPICABLE 2 one senses how the sumptuously performed SMURFS 2 is trying to achieve some truly lofty musical goals for a “kid’s” soundtrack, as can be said of Pereira’s thoroughly pleasant work in the genre.

Clink on the link to Purchase the Despicable Me 2 soundtrack

Clink on the link to Purchase The Smurfs 2 soundtrack