With tons of new faces, the show gets a facelift, thankfully Fey is a strong anchor for the premiere 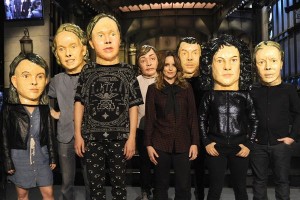 As SATURDAY NIGHT LIVE enters Season 39, it also enters what host Tina Fey explains in her opening monologue what is a “re-building year.” This has happened quite a few times in SNL’s rich four-decade history, and it usually includes a mass exodus of cast members and the introduction of a whole bunch of new faces.

Some times, the rebuilding takes a little longer, as was the case in the mid-1980s when executive producer Lorne Michaels returned to the series he left after the original Not Ready For Prime Time Players and inserted a bunch of established movie stars like Robert Downey Jr., Anthony Michael Hall, Randy Quaid with some new comedians including Jon Lovitz, Dennis Miller and others. It didn’t quite work, but after some major reshuffling the following year, we had Dana Carvey, Kevin Nealon and Phil Hartman join the cast, and the rest is history.

A similar transition occurred in the 1990s, that resulted in Will Ferrell taking the SATURDAY NIGHT LIVE stage by storm.

This has resulted in the addition of six new featured cast members: Beck Bennett, John Milhiser, Kyle Mooney, Mike O’Brien, Noël Wells and Brooks Wheelan. And for the first time, SATURDAY NIGHT LIVE really plays up the fact that they have a bunch of new faces you haven’t even heard of.

When Fey does her opening monologue, she explains how being a featured player means you have embarrass yourself by dancing behind the host, which she makes them do. Then she makes a joke about how we won’t see any of them for the rest of the show.

Another sketch is a game show were Fey has to determine if a person is a new cast member or a member of Arcade Fire (the musical guest for the night).

Unfortunately, and expected, the jury is out as to how good any of the new cast members will be. There’s no diversity in the group – they’re all white – so the male cast members all bleed together. However, the lone female of the group Noël Wells killed it with her impersonation of Lena Dunham on a parody trailer for the new season of GIRLS.

The rest of sketches, for the most part were lukewarm, though Fey and Killam playing airline attendants going through the labyrinth-like process of boarding everybody on a plane was the funniest of the bunch.

Rebuilding is also in order for WEEKEND UPDATE. Seth Myers is moving on to the post TONIGHT SHOW slot in the spring, so he has a new co-anchor with last year’s stand-out Cecily Strong. Like all first-week anchors, she’s a little rough around the edges, but there’s definite potential here, especially if Myers leaves the anchor chair in the spring (it’s still to be determined if he’s going to stick around for the full season).

It’s tradition to crucify SNL every season, and certainly last year, even with some of the core cast there, it was very spotty. And this year is going to be rough on the show, especially if few of the new six performers don’t click. The turnover rate on the show can be brutal. Just look at Tim Robinson who was a featured player last year, and quite good, but was demoted to writing staff this year (it’s one of the bigger mistakes SNL has made in some time).

With a year to go before the 40th Anniversary of the franchise, SATURDAY NIGHT LIVE will survive, as it always does. The question is how long will it take to rebuild and whether or not the show will tread water or find its funny core once again. Regardless, I’m excited to see what happens with the new cast members, and I hope, in the coming weeks they start to shine instead of kept to the sidelines like so many featured players before them.