Home » we are what we are movie review 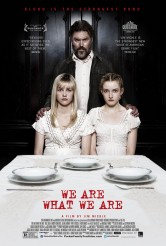 ©2013 Entertainment One
WE ARE WHAT WE ARE movie poster
Reviews

Movie Review: WE ARE WHAT WE ARE

A quiet, disturbing horror film with a matter-of-fact manner 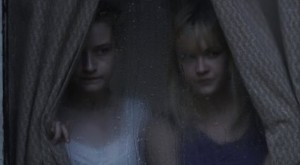 Families that keep to themselves tend to draw social suspicion, and are therefore a staple of horror movies, with the original TEXAS CHAINSAW MASSACRE still the prime example of the form. However, what if there was nothing outwardly strange about the family at all, with their reticence assumed to be simply extremely conservative religious values?

Such is the case in WE ARE WHAT WE ARE, the English-language remake of director/writer Jorge Michel Grau’s 2010 SOMOS LO QUE HAY. In the new adaptation, written by Nick Dimici & Jim Mickle and directed by Mickle, the Parkers are quiet and well-liked in their small rural town. There’s father Frank (Bill Sage), mother Emma (Kassie DePaiva), teen daughters Iris (Ambyr Childers) and Rose (Julia Garner) and young son Rory (Jack Gore).

As the film starts, there’s a terrible rainstorm. Emma has a seizure at the local market, which causes her to have an accident. This causes Frank to put pressure on Iris and Rose to assume what had been their mother’s duties – the movie is deliberately vague as to whether this means marital relations, but the Parker girls are expected to make sure an essential ritual goes as planned. Meanwhile, local Doc Barrow (Michael Parks) finds that Emma was suffering from a highly unusual brain disease that usually occurs only in people who have ingested a particular type of meat.

We are solidly on the side of Iris and Rose, who are dedicated to one another and their brother and trying to be good daughters, though the notion of rebellion is beginning to stir even as they obey their father’s edicts. Sage even wins a tiny bit of sympathy for Frank, who clearly sees no other option than being true to his heritage. Sage plays Frank as a hardworking, serious-minded man who has no special joy in flouting conventional morality, only a bone-deep sense of duty. Childers has an ethereal presence and Garner has a spirit and dawning fury that make us want to see more of the actress.

WE ARE WHAT WE ARE has an assured pace, building suspense incrementally, starting from a place of great calm and building to a wild finale. While the filmmakers make it very clear that WE ARE WHAT WE ARE is about the specific and invented beliefs of the Parker clan, it’s easy enough to draw analogies between the harmful consequences of their isolation and other real-world cults. It’s a potent metaphor and one worth contemplating – until the film seems to make a supernatural jump near the end that’s a bit of a head-scratcher. It’s not that the film can’t accommodate some fantasy elements, but rather that the development hasn’t been set up well enough to feel organic when it occurs.

Otherwise, WE ARE WHAT WE ARE is a solid low-budget horror film that is deeply creepy, partly because it’s well-made and well-acted, and partly because it derives its chills from a mindset we loathe but recognize all too well from the real world.

Article Source: Assignment X
Article: Movie Review: WE ARE WHAT WE ARE