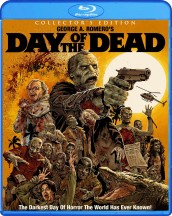 Not as brilliant as DAWN OF THE DEAD, this 1985 zombie film still has its own special punch to the bloody guts

While none of George A. Romero’s zombie films were respected in the respective years of their release (1968 for NIGHT OF THE LIVING DEAD, 1978 for DAWN OF THE DEAD and 1985 for DAY OF THE DEAD), they have since become the cornerstones of classic zombie cinema.

We wouldn’t have the zombie onslaught today without Romero’s thoughtful and terrifying visions of hell literally visiting earth and there would be no THE WALKING DEAD (the comic or the TV series) without the unique world he created.

Thankfully, the movies all found a life of their own, and now the least revered of the three, DAY OF THE DEAD, has finally been given a deluxe Blu-ray treatment. Re-watching the film again, it definitely has its flaws, but it’s as original and as daring as both NOTLD and DAWN were.

Like the previous films, there are no returning characters, instead, the zombies are the constant threat. Where b dealt with a farmhouse overrun by zombies and DAWN dealt with consumerism in a shopping mall, DAY is more focused on the end of civilization as we know it as a group of scientists and military hole up in a bunker trying to figure out a solution to this problem.

Of course, the solution isn’t very easy and in fact is quite brutal, even by zombie standards. The good doctor Logan (Richard Liberty) has been trying to domesticate the zombies and even has Bub (Howard Sherman) to show for it. Bub remembers things from his previous life as a human and even looks to Logan as his owner – like a good dog. Of course, never teach a zombie how to use a gun, especially when it has teeth.

Meanwhile, the military wants to put a stop to the experiments, because it’s making its numbers dwindle. Military leader Rhodes (Joe Pilato) is losing his mind and the pressure is getting to him, which results in confrontations with everyone including scientist Sarah (Lori Cardille).

There’s a ton of yelling in this installment and it does take awhile to get to some heavy zombie action, but when it does, it’s glorious and some of the best of in the franchise. In the interim, the characters wax philosophically or argue with one another, but even though some of the dialogue is a bit politically incorrect by today’s standards, it’s still fascinating to listen to. Romero was always interested in writing allegorical tales and this one is no different and he keeps the film lively even where there are long stretches without any blood and gore.

The budget was a hindrance for Romero, who could have had a bigger budget if he would have conceded to an R-rating. Instead, he wanted it to be unrated and no holds barred, which is great, but it also means his full epic story only saw part of it being realized on screen.

The special features includes a pretty exhaustive making of documentary with new interviews with Romero, the cast and crew. It sheds light on the making of the film and the compromises Romero had to make.

The high-def transfer looks fantastic, and there’s also the expected behind the scenes leftover from previous DVD editions including trailers, TV shops, photo galleries and even more.

DAY OF THE DEAD is a fantastic zombie movie, more THE WALKING DEAD than DAWN OF THE DEAD and it really pushes the zombie genre into some very cool areas. Bub is still one of the most memorable zombies in the history of the genre. It’s nice to have the Collector’s Edition to remind us what a talent Romero is, and also why this is one of the most underrated zombie films ever made.