The episode maintains the show’s good balance of humor, mythos and monsters 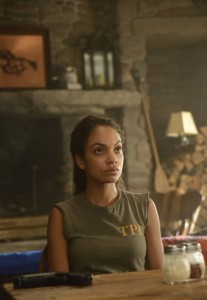 SLEEPY HOLLOW adds creative historical footnotes to its already impressive list of assets. In “The Lesser Key of Solomon,” we learn that Ichabod Crane (Tom Mison) orchestrated the Boston Tea Party in order to steal a mystical item (see the episode title) from the Hessians. The Horseman was/is one of the Hessians, a group of German soldiers loyal back then to the British cause. This particular group of Hessians is also loyal to the demon Moloch, the entity seen by police lieutenant Abbie Mills (Nicole Beharie) and her sister Jenny (Lyndie Greenwood) when the two were children.

As Jenny has escaped from the mental institution and is now on the run, Abbie gets her boss, Captain Irving (Orlando Jones), to suspend a police search so that Abbie and Ichabod can find Jenny first and, they hope, get her to tell what she knows. It turns out that Jenny knows some surprising things, courtesy of Abbie’s old mentor, the late Sheriff Corbin (Clancy Brown), who had secretly befriended Jenny and sent her around the world to collect mystical artifacts.

Sleepy Hollow is still having a Hessian problem in the form of a music teacher (Carsten Norgaard) who is secretly a member of the cult. He manages to open a gate to Hell before Abbie shuts it down by throwing a book – the Key – into the flaming circle. The Hessian dies, but not before bragging that there are sleeper agents all over the world, masquerading as perfectly normal friends and neighbors. In other words, trust no one.

On the upside, Abbie and Jenny mend their estrangement. Abbie offers to take legal responsibility for Jenny so that the mental hospital will release her and Jenny finally offers some forgiveness.

The lake of emerging demons is a suitably Halloween-time image and the general nastiness of the Hessian gang marks them as reliably despicable bad guys. The animosity between Abbie and Jenny is understandable but still goes on for what feels like a bit too long from an observer’s standpoint; it’s good that the script brings this to a close when it does.

The episode begins with a great bit of fish-out-of-water play, as Ichabod soulfully unburdens himself about his longing for his wife (Katia Winter) – to the operator at the security company who is helping him unlock the car.

Once more, SLEEPY HOLLOW proves to be solid supernatural fun.