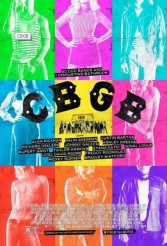 The movie CBGB is something like its depiction of club proprietor Hillel “Hilly” Krystal, played here by Alan Rickman. It is sweet-natured and a lot of fun, but would prefer not to sweat the small stuff. It’s not that CBGB is short on details – in fact, the film largely lives on anecdotes – but just as Hilly is allergic to examining his bills, the movie doesn’t want to come to any conclusions about the why of it all. It’s content to show us how Hilly came to open and run CBGB, the club that rose to fame for existing in the Bowery and giving breaks to then-new artists like the Talking Heads, Blondie and the Police. It’s a lively tale, full of quirky and colorful characters and absolutely plausible to anybody involved in low-budget stage endeavors, in New York or elsewhere. What it doesn’t do is try to get under the surface of why things happen the way they do, so that we know little more about Hilly’s motives at the end than we do at the beginning.

An amusing opening shows us Hilly at age two-and-a-half, already prepared to go his own way. By the time Hilly sees that there’s an opportunity to buy a rundown (even by neighborhood standards) building in New York’s Bowery where he could open a club, he’s been through divorce, bankruptcy and two other failed clubs. Undaunted, he cajoles money from his mother Bertha (Estelle Harris) to purchase the property. Hilly’s notion is that the club will feature country, bluegrass and blues – hence the name CBGB. What Hilly gets with open auditions, however, are largely untried bands playing punk. CBGB is small, unhygienic (Hilly’s large dog is epically non-housebroken), a fire hazard – and soon a messy musical legend that, oddly, never seems to go to Hilly’s head.

For those who were alive and around a low-budget music/theatre/arts scene in any big city (not just New York) during the ‘70s, CBGB will strike notes of nostalgia and verisimilitude. Nobody knows quite who or what will come through the door next, genius or drug addict (or both) – those who manage to stick it out are those who can take it all in stride.

The stylistic decision by director Randall Miller and his co-writer Jody Slavin to frame the action in occasional comic book art and frequent comic book dialogue balloons is amusing and energizing, albeit not especially illuminating, as the action doesn’t cry out for graphic arts treatment. Punk Magazine founders John Holmstrom (Josh Zuckerman) and Legs McNeil (Peter Vack) are made part of the story, but the traditional comic book look isn’t their style and we see more of CBGB’s impact on them than the other way round.

CBGB the movie never makes the urgent connections that make a narrative compelling – there are moments that depict calamity and salvation, but Hilly is depicted, and played, as being so grumpy and quizzical and deadpan that we don’t, for instance, understand why he opts to try to manage the unmanageable band the Dead Boys (as opposed to any of the other acts that come through his doors). The filmmakers are too respectful of the real Hilly to want to get inside his head. This is an understandable stance, but it keeps us from having a strong point of view here, beyond the sense of “Wasn’t that a great time?”

Making this last point, the depiction of the bands is sometimes exhilarating – Malin Akerman makes a beguiling young Debbie Harry and Mickey Sumner is compelling as Patti Smith, making us wish we were there in the club when she was belting out “Because the Night.” The Talking Heads are depicted, as well they should be, since their “Life During Wartime” (which mentions CBGB in the lyrics) propels the opening of the film. HARRY POTTER fans may also get a charge out of seeing Rickman have some scenes with Rupert Grint, who plays Dead Boys band member Cheetah Chrome.

CBGB is a little bit like being there at the time – we see the sights, hear the sounds and experience the attitudes, but we feel like onlookers, not like participants who are in the know. It’s fun, affectionate and certainly tuneful, but it doesn’t get under anyone’s skin.