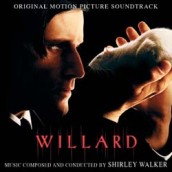 Squeaking, clawing, skittering and doing the polka? These are but some of the musical approximations of being both rat and human screwball that Shirley Walker conjures in her beyond brilliant score for one of the last decade’s most unexpected cult pleasures. As an orchestrator for such macabre Danny Elfman efforts as BATMAN RETURNS and NIGHTBREED, Shirley Walker got to demonstrate a talent for black humor and eccentric orchestrations, seizing upon her abilities for the BATMAN animated series and the hilariously gore-licious FINAL DESTINATION series. It was that gross-out franchise’s creators Glen Morgan and James Wong who had the brilliant idea of remaking a 1973 thriller about a reject and his best rat into a vehicle for Crispin Glover, an actor who stands as the greatest embodiment of quivering craziness since Peter Lorre.

If Shirley Walker captured any of her male compatriot’s spirits, then it would be Bernard Herrmann, a composer who knew how to take his horror music wildly over the top to simultaneously scare and delight his listeners. Here, that spirit of serious mischievousness is Ben to Walker’s WILLARD for a score that’s pure Grand Guignol. The idea of putting together the largest assemblage of accordionists for a film score is batshit brilliance itself (and a sight to behold on the film’s DVD), immediately cueing the audience in to the film’s twisted “yuck” factor. Yet it’s a huge credit to Walker that “Willard” relishes in its fun without being goofy about it, especially as the pounding orchestra reveals that this score will indeed have sharp teeth. What’s better is the stunning wealth of themes to be had, equally rivaling the number of leitmotifs that Herrmann could pack into his work. Walker varies her themes into a march for rodent soldiers, nursery rhyme rhythms, a motif for a pied-piper flute. Her score uses aching strings to plead sympathy for a misunderstood mama’s boy, or goes for throttling panic with a percussively shredding attack. One senses Herrmann would approve of the pure deviltry of grand mix of evil and empathy.

Shirley Walker might sadly be gone, but the wonderfully twisted spirit that distinguishes her horror scoring ability at its peak comes to full, skittering life in La La Land’s album, featuring an excellent dissection of Walker’s twisted intentions in John Takis’ liner notes. Indeed, Walker couldn’t have asked for more appreciative valentine to her best score, whose resplendent accordions are sure to bring a smile with the sheer, audacious brilliance that remains WILLARD.

Clink on the link to Purchase the WILLARD soundtrack