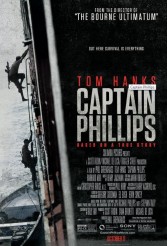 Even before Johnny Depp repeatedly set sail under the Disney flag, sea-going piracy in the popular imagination tends toward the sword-wielding, rum-swilling skull-and-crossbones proud individualists. Modern-day piracy is neither colorful nor romantic, but simply a scary, deadly business. What makes CAPTAIN PHILLIPS so gripping, apart from its visceral sense of danger, is that it daringly gives us both points of view. We expect, and receive, a clear sense of empathy with the imperiled American cargo ship’s captain and crew, but we’re also provided with a surprising amount of insight into and empathy for the pirates.

CAPTAIN PHILLIPS is a dramatized account of an incident that took place in the waters off the Horn of Africa in 2009, when a small band of Somali pirates boarded and commandeered the U.S. container vessel the Maersk Alabama. Working from the nonfiction book A CAPTAIN’S DUTY: SOMALI PIRATES, NAVY SEALS, AND DANGEROUS DAYS AT SEA, director Paul Greengrass and writer Billy Ray construct a narrative that gives us the growing dread about the Alabama as the captain and crew realize they’re being targeted.

The ship’s captain, Rich Phillips (Tom Hanks), goes to extraordinary lengths to protect his crew in sequences that are riveting. However, what’s really eye-opening here is the depiction of the pirates. We first meet the men – group leader Muse (Barkhad Abdi), young novice Bilal (Barkhad Abdirahman), permanently hostile Najee (Faysal Ahmed) and pilot Elmi (Mahat M. Ali) – in a coastal village inSomalia. An emissary of the local warlord shows up to say it’s not enough that they took a ship last week; they must do it again now. Exactly what will happen if they don’t obey is not spelled out, but in any event, there don’t seem many alternatives. Everyone here is living in tents or shacks. Piracy is seen as both a brave and practical way of making a living, no different than joining the army. Muse supposes that things will go smoothly – they’ll take the ship, obtain a ransom, go on their way and no one will get hurt. There are plenty of factors he doesn’t count on, including having half his crew head for home before the target is even in range, but Muse is extraordinarily determined. When he says, “Everything’s going to be all right,” he’s speaking the truth as he sees it, and when he assures Phillips, “We’re not al-Queda,” he expects this to be greeted as good news. Instead of faceless, implacable villains, we have antagonists who are starving and desperate individuals, resolved not to be victims of their life circumstances.

We ultimately can’t help but side with Phillips and his men, who may be working for forces likely no more warmhearted than Muse’s warlord, but they are peaceful people on a non-aggressive mission and clearly the wronged parties here, even more so because they do not get timely assistance from the authorities (it is mentioned in the production notes, though not in the film, that the incident was instrumental in changing maritime policy regarding protecting ships in dangerous waters). Still, the filmmakers and actor Abdi make us understand Muse’s position, enough to make us feel real terror at the confrontations, because no one – not Phillips, not Muse and not the audience – wants anyone to get hurt.

This is conflict that is at once fundamental and deeply nuanced, with survival riding on minute details and decisions. Director Greengrass employs a very fluid camera style, so that we feel as if we’re in the room with these people.  We also learn a number of things along the way, like how non-military ships defend themselves against pirates, and how four armed men can paralyze an entire crew (Greengrass covered somewhat similar subject, albeit with a different style and emphasis, in 2006’s harrowing UNITED 93, about one of the 9/11 planes).

Hanks gives a wonderful performance that draws us into Phillips’ plight, even though the accent he employs here sometimes draws attention to itself. First-time professional actor Abdi is extraordinary. Abdirahman is similarly commendable as a youth whose attempt to prove himself puts him in an awful situation. The rest of the supporting cast is naturalistic and persuasive.

Between CAPTAIN PHILLIPS and GRAVITY, this October is shaping up as an edge-of-the-seat month at the movies. Which one appeals more to the individual viewer has a lot to do with preferences – 3D, oxygen, dialogue and sociopolitical implications all come into play – but both are powerful exercises in cinematic tension.