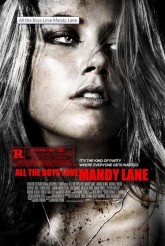 A slasher film with a particular point of view

ALL THE BOYS LOVE MANDY LANE turns out to be a movie with something on its mind. To say exactly what that is, however, risks spoiling the ending. Once we’re at the ending, there’s plenty to talk about. The movie is worthy of discussion – perhaps even thesis papers – but there’s no way of even implying why without examining it as a whole, which shouldn’t be done beforehand.

What ALL THE BOYS LOVE MANDY LANE looks like for most of its running time is a moderately well-done FRIDAY THE 13TH knock-off, with a bunch of high school kids holed up for the weekend at the ranch retreat of one of their number. Per the title, all the boys (and perhaps one of the girls) are all very interested in hot/cool classmateMandy Lane (Amber Heard). Mandy is beautiful, smart, athletic and has suffered some personal losses, as well as the horrifying experience of having a boy proclaim his love for her, then immediately albeit accidentally cause his own death. There are the usual people among the group – mean girl, insecure girl, class clown, decent guy – plus a groundskeeper (Anson Mount) with tragedies of his own. First someone plays a few malicious pranks – and then whoever it is escalates to bloody murder.

It’s not an unfamiliar horror scenario. MANDY LANE is acted well, scripted acceptably and has some genuine surprises, though few actual jump scares. The film was actually made in 2006 and has acquired some deserved fame for making the rounds for all that time rather than fading away, finally achieving full theatrical release now, perhaps because people have been discussing it throughout.

It’s unfortunate that writer Jacob Forman and director Jonathan Levine couldn’t integrate more observations into the body of MANDY LANE, providing a little more emotional and intellectual scenery along the way. They do have a quiet Andrew Wyeth isolationist aesthetic that makes for some visual tension, a la TEXAS CHAINSAW MASSACRE, though we could have stood to spend a bit more time establishing the individual personal dynamics in high school.

Heard is charismatic and self-possessed and Mount (now of HELL ON WHEELS) plays the line between heroic and threatening well. The rest of the cast is good.

Most of MANDY LANE is creepy rather than frightening, but it winds up making some very on-target and visceral observations that have kept it alive from completion to release, which is quite an achievement right there. See it, exchange views on it and come to your own conclusions.