Home » THE TOMORROW PEOPLE review of the season premiere 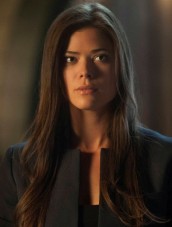 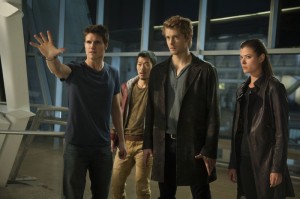 THE TOMORROW PEOPLE was originally a British TV series, created by Roger Damon Price, that ran for sixty-eight episodes over eight seasons, 1973-1979, back in the days when the title didn’t seem quite so silly. It was revived in 1992, and now writers/producers Phil Klemmer & Greg Berlanti & Julie Plec have banded together to give it an updated go on the CW.

The Tomorrow People – who actually call themselves that, though they blame their nemesis for coining the term – are a group of teenagers who have discovered they have unusual abilities that seem to be the product of a leap forward in human evolution. Stephen Jameson (Robbie Amell, cousin of ARROW’s Stephen Amell) has realized something strange is going on, as he keeps waking up in inconvenient places – like between a married couple – without any idea how he got there. This turns out to be because Stephen has been sleep-teleporting himself. Once he meets some of his peers – attractive Cara (Peyton List), troubled leader John (Luke Mitchell) and lively Russell (Aaron Yoo) – Stephen learns that he has other abilities, which he soon has to deploy in self-defense. There’s a shadowy government organization headed by Dr. Jedikiah Price (Mark Pellegrino), dedicated to stopping superhumans at all costs, lest they become a threat to regular folks. By the end of the first episode, it seems that Jedikiah may have a secret agenda and that Stephen may be the most powerful member of the group.

There isn’t anything particularly wrong with THE TOMORROW PEOPLE (beyond its title), though the same general notion can be seen elsewhere in many places. More specifically, it’s like a (so far, at least) aged down and less complex version of Syfy’s two-season ALPHAS. It might be more interesting if the abilities within the group here were more varied, but as this is only the pilot, there may well be plenty of new tricks down the road. Certainly the notion of human evolution has plenty of fascination and potential.

Amell is a likable lead and the excellent Pellegrino provides an adversary of multifaceted, dark gray morality. Madeleine Manlock is appealing as Stephen’s best friend, who should probably be let in on the secret as soon as possible. (Why do shows in this genre persist in dragging out the “big secret” aspect of these stories? Are there really that many viewers who enjoy this, as opposed to thinking, “Good grief, just get on with it”?)

THE TOMORROW PEOPLE is for those people today who have room in their viewing schedules and hearts for another show about imperiled teens with powers and secrets. For those who love the genre but have limited time, this is neither the best not the worst example of the breed.