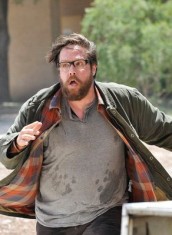 Another solid episode where the motivations of the U.S. government get more cloudy 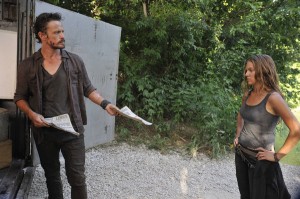 It is pretty safe to assume that whoever is claiming to be the U.S. government on REVOLUTION isn’t all that they are cracked up to be.

In the amusingly titled “Love Story” we learn that the so-called government has been paying the crazy child molester turned cult leader, Titus, to scare the town of Texas where Rachel, Miles and crew have been holding up since after the bombs fell in last year’s season finale. Hiring his band of war clan nasties paid off. It scared the bejesus out of the town.

But they didn’t count on Miles (Billy Burke) taking Titus’ wife after being rescued. They didn’t count on said wife killing herself to get away from the crazy Titus, who we learned was feeding her the blood of random strangers in order to help keep her alive from kidney failure. Lucky, they were just waiting for the right moment to kill off all the war clan in a moment’s notice if things went FUBAR. And, of course they did.

But that begs the question: Why were they trying to scare the town? Why not go in with open arms and loads of food and other comfort items like they did where Neville (Giancarlo Esposito) and Jason are stationed? What are the secret communications going back and forth between the leaders and those in the field operating under disguise? What’s with all the Illuminati (what I assume they will be) symbols?

I like the idea this whole idea of the Illuminati praying on the weakness of people who desire a unifying symbol of the U.S. government because things have been so bad with numerous clans and militias fighting it out since the power went out. It makes perfect sense for this group, which if legend is to be believed have waited in silence and shadows for generations, to emerge under the cloud of another organization in order to gain control.

Meanwhile, Charlie (Tracy Spiridakos) tracks down Monroe (David Lyons) only to learn that the same U.S. government is not only searching for Monroe, because obviously, but her mother, Rachel (Elizabeth Mitchell) as well. Why they desire her captured is a mystery, however, we may learn more in the next episode when the U.S. military takes over the town and Rachel is obviously there and hurt from this episode after taking an arrow in the shoulder.

There wasn’t much follow up with what’s happening with the dead rats or the fireflies or why Aaron (Zak Orth) was brought back to life, which is definitely an interesting subplot, but hopefully we will see more of this in future episodes.

Finally, things are heating up with Neville as he is true identity is found out by the U.S. government but instead of killing him outright, they decide to keep him close and maybe use his unique talents in order to further whatever goals they have.

Overall, this was yet another solid episode of REVOLUTION and I really liked that they did a slow burn with the whole Titus versus the town thing and how this really bad love story played out.