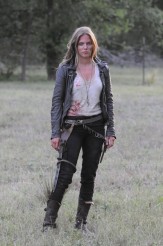 TV Review: REVOLUTION – SEASON 2 – “There Will be Blood”

Another solid episode with a variety of plotlines, all pretty darn good 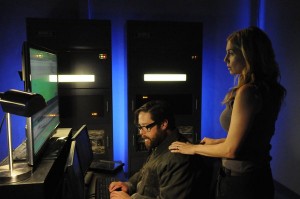 Well they have certainly have flipped the tables in the second season of REVOLUTION.

Gone is the tired war between the rebels and the Monroe (David Lyons) militia and now we are seeing a variety of storylines going for multiple characters and shockingly, extremely shocking, they are all pretty good.

First, who knew that a piece of pool tile could be so damn handy? But Monroe sure knew it would not only free him from his binds but allow him to escape his paddy wagon that was being used to transport him to the new U.S. government for war crimes. Monroe knows how to survive and Charlie (Tracy Spiridakos) was right in that he would escape and the bounty hunters that had him would have nothing. Now presumably she will team up with the surviving member and hunt him down. But what role Monroe has in the state of this new show is yet to be seen.

#aaronlives ! Probably the weirdest moment from the opening episode of the season was the death and seemingly rebirth of Aaron (Zak Orth) and now he is having visions and believing that he has some sort of unknown power that may be the reason he was saved. It no doubt has ties to whatever is going on with the fireflies that keep buzzing not to mention the horde of dead rats that they ran into during the last part of “There Will be Blood.” What this whole supernatural aspect means we don’t know yet but it is entertaining.

Aaron said to Rachel (Elizabeth Mitchell) that it had something to do with the nanotech that were released into the air after the blackout. He also said he had a theory about the blackout and his rebirth but it wasn’t really explained in the flashback where he failed to stop the nukes from detonating over Atlanta and Philadelphia. Since this seems to be one of the major plot points for Season 2 (and again a huge departure from Season 1), we will no doubt get more moving forward.

Then there’s Miles (Billy Burke) that finds himself trapped in crazy town with some child molester leader and his clan of cronies that seem to have some odd agenda involving a red door and some zombie chick hooked up to a slew of medicinal tubes. I like this storyline as it is totally different from anything Miles has had to face at this point and seeing him deal with this craziness and his stark attitude is fun. Again, it is shocking how much this show has changed for the better.

Lastly, there is the long journey into the heart of the newly emerged U.S. government by Neville (Giancarlo Esposito) and his son as they try to expose them for what he believes is a fraud and he (rightly so) believes they were the ones to set off the nukes. He may also be right that this is not the government but maybe the Illuminati? That seal on those envelopes sure did seem like it might be the case and they have some connection to the group getting ready to raid the town where Aaron and Rachel are holding out in.

So another solid, enjoyable episode from REVOLUTION. Who would have guessed that this would happen? After such a milquetoast Season 1 that droned on and was brutally boring at times, the first two episodes of Season 2 have been enjoyable and make me want to see what happens next.