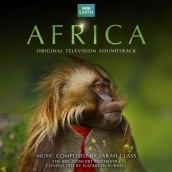 Along with their DR. WHO soundtracks, Silva Screen has seemingly cornered the world market on the music of BBC nature documentaries. Where some of these entries dumbed down animal behavior into the stuff of Carl Stalling antics amidst more noble-minded orchestral grandeur, AFRICA‘s vast, stylistic continent shows why this is the land mass where two-legged intelligence began.

Taking on thee task of chronicling every life form and landscape is Sarah Class, a composer whose documentary-filled resume understandably landed her the job with the likes of MYSTERY OF THE WOLF and THE MEERKATS There’s an exceptional level of writing, and elemental power to Class’ achievement. Not only does she deliver on the expected symphonic sweep and drum percussion that conjures LION KING-like expectations, but Class also digs far deeper into the likes of voice, guitar, empathetic violin, pianos and haunting electronics, with each selection working as its own musical entity. Class has gone beyond AFRICA to represent a musical worldview here, as capable of enchantment as it is fearsome wildness. Even small cases of the cutesies don’t distract as the ethno-beat combines with more elegant orchestral forces to capture the imagination. It’s a musical mix of the imagination that nature documentaries unleash in their best composers, and the evocation of the real world that make “Africa” into a dazzling and evocatively epic musical journey.

Clink on the link to Purchase the AFRICA soundtrack