Home » Bones review of The Sense in the Sacrifice 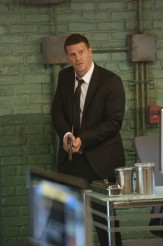 TV Review: BONES – Season 9 – “The Sense in the Sacrifice” 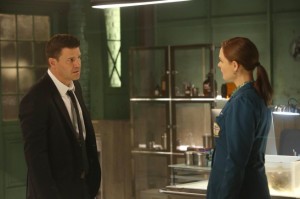 Brennan (Emily Deschanel, R) and Booth (David Boreanaz, L) discuss old cases that may be tied to the recent murder of an FBI Agent in BONES | (c) 2013 Patrick McElhenney/FOX

BONES is, among other things, a crime procedural. We spend a lot of time watching our heroes process evidence. However, when it comes to serial killer Christopher Pelant (Andrew Leeds), they and we know that evidence is often falsified. So what should everyone believe in “The Sense in the Sacrifice,” when it looks like Booth’s (David Boreanaz) FBI colleague and friend Flynn (Reed Diamond) is gruesomely murdered by Pelant, but evidence suggests the two men may have been in collusion?

The notion of what this crack team would do when they suspect their evidence is wrong doesn’t go far enough here. This is also an occasion when we’re sure Booth is right, but way too much is made of his gut and not enough of sheer common sense. When it’s pointed out to him that Pelant’s territory is usually within the cyber realm, it’s amazing that Booth doesn’t counter by enumerating the many occasions when Pelant has physically sneaked in somewhere to further his cause.

This time, it turns out that Pelant has taken a shine to Brennan (Emily Deschanel). Realizing that she does admire his intellect, Pelant shares with her what seems likely to turn out to be a new future case (or even arc) involving a female serial killer. Then Pelant lures Brennan to his base of operations, but unwisely supposes that she may risk Booth’s life in order to learn more about the new serial killer. When Pelant tries to make the point that Brennan is willing to endanger Booth to preserve Pelant, Brennan immediately says that no, she’s not, and Booth should go ahead and shoot Pelant. Since Pelant is threatening to blow up the building with all three of them in it, Booth fires and kills Pelant. He and Brennan don’t check the body – lucky for them this isn’t a horror movie. Booth finally explains to Brennan that Pelant had threatened to kill innocent people if Booth and Brennan got married, or even if Booth told Brennan why they couldn’t get married. Brennan says she figured it was something like that. Booth then essentially proposes, Brennan says yes, and all their friends watching on the monitor rejoice.

There has been a great deal of fan unhappiness with the enforced delay of the Brennan/Booth marriage, which may have led to a quicker end to Pelant than may have originally been intended. Certainly given how his story thread played out over the past two seasons, having Pelant rather abruptly realize he was attracted to Brennan and Brennan and Booth being able to track and thwart him in the span of a single episode seems a bit sudden. However – and this is no knock against actor Leeds, who has delivered an assured performance start to finish – Pelant is no Trinity Killer. His snarky, egomaniacal psychosis made us want to punch him rather than psychologically thwart him, and the deal he made with Booth to prevent Booth from marrying Brennan seemed a little strange: did it mean that Pelant would not kill anyone so long as Booth kept his mouth shut? The storyline was treading on somewhat unsteady ground, and bringing it to a close, even one that came sooner than established patterns dictated, is a wise choice.

The creative staff have also left themselves a good opening for a new villain with the female serial killer Pelant had uncovered (that’s all way too big to be a red herring), which may play out in intriguing fashion.

It’s a shame to lose Diamond as Quinn, mainly because Diamond is one of those actors who brings added luster to whatever he’s in, but the character’s death begins the episode on a suitably grim note so that the mood is appropriately dark, the better to contrast with the joy of Brennan and Booth finally being able to come together. That is indeed the sense of satisfaction in the sacrifice of a bit of BONES consistency.