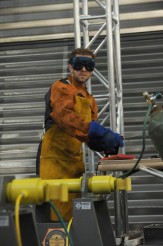 Gang violence, with an unexpected perpetrator but a too-tidy resolution 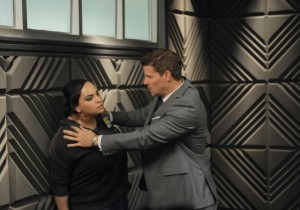 With all of the international intrigue in many episodes, it seems fitting that BONES should at some point tackle gang violence, especially as it’s based in D.C. “El Carnicero en el Coche” does well in terms of setting up a physically intriguing murder and in giving us a surprise killer. However, in a rush to provide a tidy ending, it presents us with a scenario so emotionally improbable that, even in the sometimes fanciful context of BONES, it brings us up short.

The team is brought in to investigate when a skeleton is found inside a burned-out car – that falls apart bit by bit every time anybody tries to examine the vehicle or the remains. The entire car has to be brought to the lab, and Hodgins (TJ Thyne) has to examine it from above via a flying rig.

The victim, Jaime Del Campo, turns out to be an enforcer for a local gang. Booth (David Boreanaz) enlists Sweets (John Francis Daley) in the investigation, even though Sweets is on vacation, volunteering at an inner-city youth center. Sweets is a bit skeptical about Booth’s motives, suspicious that the FBI agent is trying to make Sweets feel needed rather than genuinely requiring his psychiatric skills. However, when it turns out young Javier (Felix Miguel Avitia), one of the kids at Sweets’ center, is the son of Maria Alvarado (Aline Elasmar), Del Campo’s live-in girlfriend, Sweets takes a greater interest.

Booth first suspects the warlord of a rival gang and then Maria as the culprit. However, it turns out that eleven-year-old Javier killed Del Campo, fearful that the man might kill Maria.

Having a sweet, smart little boy as the shooter is a startling plot twist, but the episode promptly recoils from the implications as fast as it can. Maria puts loyalty to the gang far above her maternal instincts, hitting Javier and saying she wished that Del Campo had killed him. And then – amazingly, given that he has just killed for her – Javier seems to take this rejection by his entire known family in stride. This makes it easy for our team to sweep in, get Javier to help them track the gang’s weapons and place Javier in foster care.

Assuming for the moment that the awesome power of the BONES team can actually find Javier a good foster home – given that his mother struck and threatened him, there are legal grounds to remove him from her custody at present – we are still stuck with something that doesn’t play right. Gang members are famous for their loyalty, and we might buy Maria turning her back on her only child if he’d betrayed the organization, but for killing her abusive, homicidal boyfriend? Really? This is made no more credible by Javier not having any detectable reaction to losing his mother. Bluntly, this is poorly handled. This is especially unfortunate, given that Brennan’s (Emily Deschanel) observations about the similarities between gangs and older warrior cultures make sense and create a different context for thinking about this violent social phenomenon – the episode starts with a very smart point of view and finishes with inept drama.

There is, however, a lot of fun to be had in the episode’s procedural elements, with the brittle car giving way at every turn and an especially gruesome examination of a severed head, with Brennan (Emily Deschanel) and Cam (Tamara Taylor) calmly going about their work and Angela (Michaela Conlin) on the verge of being sick. As for Sweets’ walkabout as he searches for relevance in his own life, “Carnicero” lets the character seem like he knows what he’s doing, which is always pleasing when it happens.

“El Carnicero en el Coche” has its positive side, but it could have been a lot better with a little more human veracity.