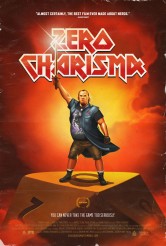 An Austin actor on playing the world’s angriest nerd

For the straight set, the year’s most acclaimed performance belongs to Cate Blanchett as the unhinged, train engine of social destruction who blasts her formerly well-ordered life to smithereens, alienating friends and family with the effectiveness of a atom bomb in her absolute selfishness. However, it’s not like a whole bunch of physically and socially awkward role-playing viewers are going to exactly identify with the plight of a former doyenne of the Manhattan social scene. Instead, the actor they will undoubtedly call their own BLUE JASMINE is an Austinite named Sam Eidson, who takes on Orc-like fury as Scott, an obsessive Dungeonmaster who unleashes a reign of fire on his cowering band of brothers in ZERO CHARISMA.

Holding onto his Dungeons and Dragons group for years with terrifyingly pathetic zeal with an self-created adventure that will know no end if he can help it, Scott’s beyond-ordered existence in his grandmother’s house is threatened when an usurper appears in the form of Miles (Garrett Graham), who is namely everything that Scott is not – handsome, brilliantly imaginative and loved by all off and on-line. Basically a grown up who can still be a hipster geek. With Scotts’ absentee mother showing up to stake a claim on the cluttered household at the same time, the King of All Nerds truly assumes Balrog-worthy fury as he pathetically attempts to hold onto the only seemingly pathetic world, and friends he’s ever known.

At once a satire of the D & D lifestyle and a takedown of the child-like zealousness it can conjure, ZERO CHARMISA, written by Andrew Matthews and co-directed by him and Katie Graham (with both having served as editors on the TROLL 2 tribute BEST WORST MOVIE) works on far more levels than just taking easy, if loving nerd shots. A look at men-children of any obsessive stripe who can’t grow up, the film’s funnily incisive satire is embodied by Eidson’s take-no-prisoners performance, which truly rules ZERO CHARISMA.

Having appeared in such Austin-made movies as NATURAL SELECTION and MY SUCKY TEEN ROMANCE, Eidson gives the role alternately frightening, pathetic and poignant commitment to create a real human being out of a character that nearly anyone of any geek or non-nerd stripe would run from – a la Banchett (though imagining Daniel Day Lewis in nerd roid rage might be more fitting). There’s plenty of CHARISMA to go around in this bolt from the blue for character acting, not to mention one of the very best movies made about a role-playing culture that’s perhaps become way too accessible to geek chic for guys like Scott, who’d rather remain locked in their fantasy realm of their ersatz parent’s basement.

ASSIGNMENT X: You give one of the best performances I’ve seen this year, especially since it gives so much dimension to a character that could have been played for one nerdy note. What was it like to carry that part on your big shoulders for your first major starring role, and the responsibility that came with it?

SAM EIDSON: It was really intense.  We were shooting like four or five scenes a day, and we only had an 18-day shoot. Like you said, the whole movie sort of rests on Scott’s shoulders because you’re watching this character the whole time. If I weren’t good, then the whole movie wouldn’t be good. But even with that pressure, we had a ton of fun making ZERO CHARISMA. It was just tons of rehearsals and stuff like that with my directors Andrew and Katie. That really helped to point out the layers of the Scott’s character.

AX: How did you identify with Scott?

EIDSON: I could understand being obsessive about something and I can definitely understand the social anxiety of Scott. I went through that phase too. I approached the role by focusing in on those particular times, and maximizing them to the extreme. Scott is anti-social and socially inept all the time. That was hard to play, as I’m not always like that. I’m pretty much carefree, and Scott’s not. He’s always intense.

AX: How important was it for you to create sympathy for Scott despite all of the obnoxiously self-destructive things he does?

EIDSON: That was kind of the hard part – to make this asshole watchable so you’re not just spending two hours with this unbearable guy. Yet in spite of what he does, Scott has his moments where he’s not just putting on a face. He can be a real person.  That spirit comes across in certain scenes, but it’s kind of fun to watch a train wreck. That’s what Scott is throughout the movie. 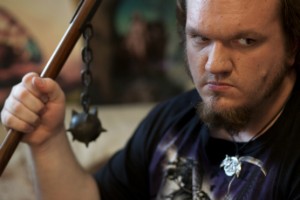 AX: Another dimensions to ZERO CHARISMA is that it’s also about a man-child who can’t grow up, let alone leave his grandmother’s house.

EIDSON: That’s another reason why I think the film has broad appeal, because it’s essentially the story about a someone who wants something so bad that he’ll do anything to get it, including being an asshole to his friends and everyone around him.  I think everyone’s known that kind of obsessive person. Or maybe they’re that way themselves.

AX: Did you ever play Dungeons and Dragons as a kid or was it something that was completely new to you to play this character?

EIDSON: I never played Dungeons and Dragons as a kid. I mostly played video games and board games – stuff like that. Our writer and co-director Andrew Matthews was the guy who was really big into D&D.  He sort of taught us the roles and how to go through the game with all of its details.

AX: Scott makes the argument that Dungeons and Dragons is more creative than sitting back and playing a story that’s presented to you, as most video games would. Do you buy into that?

EIDSON: Yeah. I think Scott’s right. There’s way more creativity in D&D then going along with a story that’s, as Scott calls it, “Paint by numbers kind of bullshit board games that just give you the story.” I agree with that.

AX: In that way, a person who thinks D&D is totally ridiculous could totally get that impression from watching ZERO CHARISMA, while the game’s admirers could come out of it appreciating Scott’s point of view. while others may see Sam’s point of view.

EIDSON: I wanted people to relate to Scott so they could understand him more. I think the film has a mixture of comedy and drama that allows that, and other times when you can just sort of look at Scott at face value.

AX: What do you think of the D&D itself, and how people at role-playing in general?

EIDSON: I think people have what they built in their minds of what D&D is. So I think people will be curious to see this movie just to witness our version of it. We simplified a lot of things, but we also tried to make a genuine version of D&D, which is usually misrepresented in our culture.  But it sort of come back with Dan Harmon doing COMMUNITY and stuff like that, so I think people are definitely more interested in role-playing gaming.

AX: When “normal” people think of D&D, it’s often of geeky guys who can’t get girls sitting in their parent’s basement playing this stuff. Scott’s nemesis Miles is a really good-looking guy who can get laid with an actual girlfriend, but who’s also into the whole nerd thing. What do you think of how the cool hipster culture is co-opting a geek culture that was once reserved for people who weren’t nearly as lucky, or as handsome as these bohos?

EIDSON: It’s definitely interesting. I think ultimately the hipster culture is like Miles in this movie. He knows a lot about geek culture, but I would still consider him a geek. I don’t think there are any requirements for being a geek, like you have to be good looking or whatever.  A lot of people react to it – the geek guy /girl thing, like girls that aren’t into the geek culture, but still go to cons and stuff. I think everybody should be able to do whatever they want to do. The whole purpose of the movie is to say that if you become too obsessed with something, then you’ll end up spiraling out of control. I think you should let people do whatever they want, and let them embrace it. It’s not like you’re going to lose your own culture because maybe a few people aren’t as knowledgeable as you are. Or they’re more handsome then you are.

AX: What were some of the things you discovered about the D&D culture?

EIDSON: I knew about D&D culture because I had friends who were more into it, as well as Andrew. I learned some of the stereotypes are true.  They’re there for a reason, because this movie is about a specific type of person. It’s like any other of stereotype, where there are always redeeming qualities to them. But stereotypes are also there to be broken.  The reception from the geek community to ZERO CHARISMA has been really great.  And that’s really awesome. 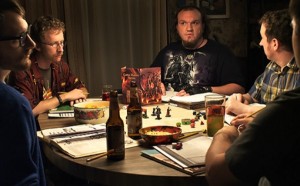 AX: I imagine that ZERO CHARISMA is going to bring you attention far outside of the Austin filmmaking community, as it deservedly should.

EIDSON: I’m very happy with this role, and I’m so thankful for everybody who’s championed the movie. I know Andrew and Katie are overwhelmed too. I only hope people get to see this movie, and that I keep doing what I’ve been doing. Hopefully more cool stuff will come out of it.

ZERO CHARIMA premieres on VOD October 8th, and rolls out theatrically during the month

Special Thanks to Peter Hackman for transcribing this interview