Not bad, but bites off a little more story than it can comfortably chew 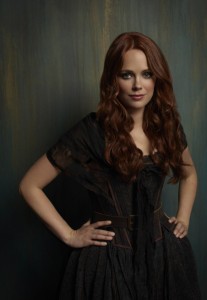 One of the genuine charms of SLEEPY HOLLOW as a series is that the episodes are unafraid to cram in whatever may work, and accelerates past the potentially dull stuff by having characters facilitate whatever needs to be done. However, in “John Doe,” the show overdoes this a bit.

When Abbie (Nicole Beharie) is called to investigate the identity of a young boy, Thomas (Matthew Lintz), who has collapsed in the street – and who we’ve seen in the forest running from a Horseman (though this one has a head) – Ichabod (Tom Mison) recognizes the language the child speaks as Middle English from the time of Chaucer.

Thomas says he’s fromRoanoke, which Ichabod deduces is the famed lost colony. Ichabod and Abbie find theRoanokepeople living on a little island in the forest – unchanged from just before their disappearance in approximately 1590. Ichabod thinks that if they can bring Thomas back to the colony, the boy will be cured, and so perhaps will those he’s infected.

When Ichabod and Abbie emerge from the forest, Ichabod is infected. Over Abbie’s objections, Ichabod is placed in hospital quarantine, where he loses consciousness and finds himself communing in limbo with his wife Katrina (Katia Winter), who warns Ichabod that he’s dying.

Even by the standards of SLEEPY HOLLOW in its early days, this is a bit much. If theRoanoke folks are dead, why are they all still in their village? Shouldn’t their souls have gone somewhere by now, or at least realized that time seems to be standing still? Can’t Pestilence figure out a slightly more direct route to this world than via a contagious ghost? How come Abbie doesn’t get sick? How does the nearly dead Ichabod carry a child through a forest? Even with the “this just might work” dialogue between Abbie and Irving, would it really be that fast and easy to get Ichabod and Thomas on the road?

Any story, especially one that’s as entertainingly told as SLEEPY HOLLOW, can sustain a couple of these questions, but this is a heavy load for one hour of commercial broadcast TV. The episode does of course have its pleasures, like Ichabod being vexed by plastic casing and referring to it darkly as an “impenetrable barrier.” Abbie also gets to balance her old and new beliefs in a way that respects both, which is good. Still, next time out, it is to be hoped that we’ll get a few less questions, with a little more time devoted to each of the ones that arise.