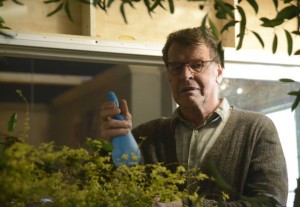 It’s been a little less than a year, but how we’ve missed seeing John Noble, until lately Dr. Walter Bishop of FRINGE, on genre TV. (Yes, he appeared on an episode of THE GOOD WIFE in between.) In the SLEEPY HOLLOW episode “The Sin Eater,” Noble appears as the segment’s title character Henry Parrish, a man who has the ability to “sanctify” others by ingesting their transgressions.

Noble’s presence certainly provides gravity and focus, but he doesn’t overbalance the proceedings, because there are high emotional stakes here. In flashbacks, we see how Ichabod (Tom Mison), then fighting for the British, first met his wife-to-be Katrina (Katia Winter) and wound up switching sides in the Revolutionary War.

In the present, Ichabod is kidnapped by a group of men who turn out to be his fellow Freemasons. Ichabod recognizes one as Rutledge (James Frain), the descendant of a man Crane knew way back when. Rutledge tells Ichabod they are all honored to meet him. Ichabod’s blood ties him to the Horseman, who is set to return tonight after sundown. Since the resurrections of Ichabod and the Horseman were tied together, Ichabod’s death should also kill the Horseman.

Meanwhile, Katia appears to Abbie (Nicole Beharie) and tells her to seek out the Sin Eater in order to find the missing Ichabod. Abbie gets her boss Captain Irving (Orlando Jones) to get Abbie’s still-institutionalized sister Jenny (Lyndie Greenwood) a twenty-four-hour pass so that she can aid in finding the Sin Eater. It turns out that Henry Parrish spent a lot of time cleansing the souls of Death Row inmates, but seeing the deepest hidden secrets of people has taken its toll and now Parrish just wants to be left alone. After a fair amount of prompting, he tells Abbie and Jenny how to find Ichabod, but refuses to go with them.

When Abbie finds Ichabod with the Freemasons, Ichabod asks for some time alone with her. Ichabod explains that he must commit suicide in order to prevent the Horseman from rising again. Abbie insists there is always another way, but Ichabod is sure this is the only thing he can do. Abbie doesn’t leave as Ichabod ingests what the Freemasons have given him.

Then Parrish shows up and says that by sin-eating for Ichabod, he can sever the blood tie to the Horseman. Ichabod finally confesses something he has felt guilty about since it happened – he was ambivalent about freeing captive revolutionary Alfred Bernard (Tongayi Chinisa), and though Ichabod did try to set the man free, his hesitation caused Alfred to be to killed by a demon masquerading as a British officer (Craig Parker). Alfred appears to Ichabod, explaining that his death allowed Ichabod to find his true path. Ichabod must not see his failure to save Alfred as a sin.

A note here: this would be absolutely appalling – Ichabod’s path being worth more than somebody else’s life – except that Ichabod is charged with saving the world, which he couldn’t very well do if he didn’t know about demons, which he wouldn’t if the demon hadn’t shot Alfred. This is left for us to infer rather than hear directly in the dialogue. Normally, subtlety is valuable, but this is one place where a little more literalism might have been a good thing.

Ichabod allows Parrish to save him after all. Parrish stabs Ichabod in the hand, waits until the blood dripped on the table has separated into two pools, mops up one with tissue and then ingests it. Ichabod is free of his tie to the Horseman and promises to listen to Abbie next time she says there’s another way, while Parrish promises to help with the quest.

Meanwhile, the Horseman rises and returns to the pit where both he and Ichabod slept for centuries.

Noble is wonderful to watch, and Frain is likewise a welcome addition to any series. The scene between Ichabod and Abbie, where both think they are saying goodbye, is very affecting. Overall, this is good television.

On the other hand, besides the potentially bizarre message, we’re also left with the question of how the Sin Eater’s actions negate what the Freemasons see as the need for Ichabod’s death. Separated, Ichabod and the Horseman both survive. It makes complete sense that with an impending apocalypse (which might continue to loom even if the Horseman were not on the scene), it’s better for Ichabod to be around to fight it than not, but that argument worked as well at the outset as it does at the end. A few less moments of slow-motion and a few more lines of discussion about this would seem warranted.

Even so, “The Sin Eater” is touching, exciting, fills in a lot of back story and, to be repetitious, it has John Noble back on a Fox genre show.