bones review nazi on the honeymoon

TV Review: BONES – Season 9 – “The Nazi on the Honeymoon”

An episode with snappy dialogue, a great guest star and some history 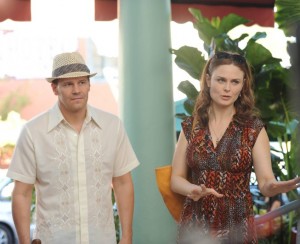 When WWII ended, Argentina opened its borders to fleeing Nazis. The BONES episode “The Nazi on the Honeymoon” uses this historical fact as the underpinnings of a plot that finds Brennan (Emily Deschanel) and Booth (David Boreanaz) on their honeymoon in Buenos Aires. Booth would be content to just relax by the pool, but workaholic Brennan is happiest on the job, so it’s not long before she manages to involved both of them in a local murder case. This exasperates local pathologist Dr. Perez (Angela Alvarado Rosa), but delights Inspector Valenza (Joaquim de Almeida), who is a huge fan of “Agent Andy,” the fictionalized version of Booth who appears in Brennan’s novels (whose heroine in “Dr. Kathy Reichs,” in a Mobius strip that loops around the fourth wall and back again).

It turns out that the ninety-year-old murder victim is a former concentration camp commander who brought a fortune in gold and stolen artwork with him to Buenos Aires. Consulting with the Jeffersonian team via Skype, Brennan figures out that the dead man was beaten to death with a bar of his own gold. In plotting that’s a bit of a stretch even for BONES, the culprit turns out to be pathologist Perez, who is the victim’s granddaughter. Perez has dedicated her career to identifying the remains of Argentina’s “disappeared ones,” victims of that country’s war thirty years ago. Finding out that she is descended from a mass murderer herself and then having her grandfather laugh at her reaction was too much for her.

This could be too much for the episode as well – the pathologist is both related to the victim and she’s the killer and nobody knew she was related to him, even though the relationship was strong enough that he intended to will his fortune to her. That’s a few too many coincidences for any story to withstand.

However, the rest of “The Nazi on the Honeymoon” – the stuff most BONES fans are watching for – is very deft and entertaining. The running gag of having just about everyone in Argentina be overwhelmingly impressed by the fact that Booth is the inspiration for Agent Andy – and Booth’s consistent delight in this – works every time. There’s also great sweetness as Booth warms to the idea of working on his honeymoon, realizing how happy it makes Brennan and genuinely being pleased by this.

There’s also wonderful guest work from the suave de Almeida, who is as urbane and charming as intended. The buddy-cop vibe between him and Boreanaz is smooth and appealing.

Back on the home front, Angela (Michaela Conlin) and Hodgins (TJ Thyne) watch their own son Michael Vincent while babysitting Booth and Brennan’s daughter Christine. Caring for two toddlers sends both Angela and Hodgins zigzagging back and forth between wanting a second child of their own and finding the prospect too exhausting, with the vote tipping towards another child as the episode ends. The cuteness of the onscreen youngsters is used sparingly, to good effect.

The plot of “The Nazi on the Honeymoon” probably wouldn’t pass muster in a Dr. Kathy/Agent Andy novel, but its execution on screen is charming.