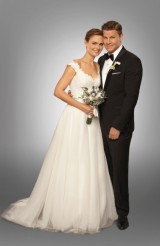 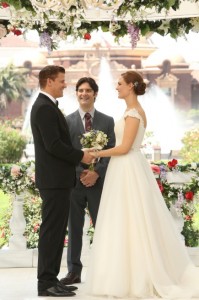 On BONES, the wedding of forensic anthropologist Dr. Temperance Brennan (Emily Deschanel) and FBI Special Agent Seeley Booth (David Boreanaz) has been in the works for so long – we’re in Season 9 now – that having it accomplished comes as much a relief for us as it is for the characters. However, the wedding itself could have gone any which way, so it’s a pleasure to report that “The Woman in White” is not only appropriately romantic, but very cleverly structured, incorporating a murder mystery that honors the show’s procedural needs without dragging in suspects and witnesses. Furthermore, nearly all of the guest characters who should be here are here (more about that “nearly” in a bit).

When the team catches a cold case involving the death of a librarian who was murdered in 1979, there are fears that Brennan will allow her customary forensic absorption to prevent her from preparing for her wedding. Dr. Clark Edison (Eugene Byrd) is already on hand in the lab, but most of the other “squinterns” – Daisy Wick (Carla Gallo), Dr. Oliver Wells (Bryan Klugman), Colin Fisher (Joel David Moore), Wendell Bray (Michael Grant Terry), Aristoo Vaziri (Pej Vahdat) – agree to come in so that Brennan will believe every aspect of the case is covered.

It turns out the librarian was murdered by an Emily Dickinson scholar who couldn’t stand that the victim had uncovered a document that clashed with the scholar’s theories. Since the scholar has had a stroke and is in a nursing home, the case can be set to rest.

However, when the church where the wedding is supposed to take place burns down, there’s some question of when, where and even whether it might be rescheduled. Fortunately, Brennan and Booth actually talk to each other about it and discover that Booth thought the church had become important to Brennan, but it only mattered to her because she thought it mattered to the devoutly Catholic Booth. With a ferociously determined Angela (Michaela Conlin) taking charge, the wedding takes place on schedule, in the rose garden behind the Jeffersonian. (Fans who want to visit the location, take note: this is actually the rose garden inExpositionPark,Los Angeles.) Brennan invites all the squinterns at Angela’s suggestion. Brennan’s dad Max (Ryan O’Neal) gets to pay for the wedding with Vegas winnings he’s been saving for decades specifically for this purpose, and he and Booth – who have had their clashes, what with Booth being an FBI agent and Max being a career criminal – reach détente. Booth’s friend, former priest Aldo (Mather Zickel) officiates and Angela’s psychic friend Avalon – played by songstress Cyndi Lauper – belts out a rendition of “At Last.” Booth rips up his prepared speech and speaks from the heart about chasing and being chased by Brennan. Brennan reads something she wrote at a time when she thought she might die, which is charming, loving and entirely in character.

The pluses here are – once again – that the marriage takes place, the way the case of the week is handled, the entirely-right-for-these-characters vows, the setting, the inclusion of so many appropriate recurring characters like Booth’s son Parker (Ty Panitz), who is appointed best man, and the overall sense of warmth.

There are a few questions, though. Why didn’t Angela think to invite the squinterns long ago, as all of them are aware of the wedding and clearly hurt by not being invited? If, as implied, Booth inadvertently burned down a church, wouldn’t he be a lot more horrified? Where is Booth’s brother and why is Brennan’s brother (presumably still incarcerated) unmentioned? A quick line of dialogue addressing this would not have been amiss. And finally, “man and wife”? This end to the wedding ceremony is often replaced by “husband and wife,” or “I now pronounce you married,” for the reason that “man and wife” implies that the groom is as he was – a man – but the bride is now changed into a “wife.” This doesn’t seem like something that would sit well with the outspoken Brennan, especially as she’s already interrupted the ceremony to point out that letting Max walk her down the aisle to Booth does not mean a transference of ownership.

This is all fairly nitpicky, though. “The Woman in White” mostly consists of good TV craft and good human feelings.