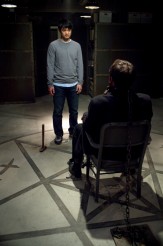 One of those episodes where people emote, blood is spilled and the main characters end up more or less where they started 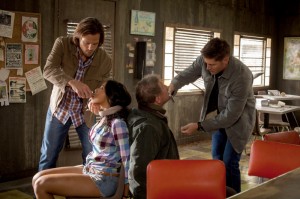 One big takeaway from the SUPERNATURAL episode “Devil May Care” is that young Prophet of the Lord Kevin Tran (Osric Chau) is officially considered family by Dean (Jensen Ackles), along with the not-in-this-ep Castiel (Misha Collins) and of course Sam (Jared Padalecki). The other notable element here is that Padalecki, playing Sam as possessed by the angel Ezekiel, has synched his portrayal of a member of the Heavenly host to Collins’ turn as Cass, with the same mixture of upfront solemnity and lurking bewilderment. It’s a hoot to watch.

Other than that, “Devil May Care” doesn’t move the pieces very far along the board. A demon summons Knight of Hell Abaddon (Alaina Huffman), who wants to wrest control of the damned domain away from Crowley(Mark A. Sheppard), who is still the prisoner of the Winchesters. Dean and Sam lock Crowley up in the basement of the Men of Letters headquarters, while they try to rescue a pair of Hunters from Abaddon’s demons. When Sam is cornered by three demons, Ezekiel comes to the fore and burns the hellspawn. Sam comes to later and Dean fibs and says he’s the one who killed the demons.

Meanwhile, Crowley taunts Kevin by saying that Kevin’s mother may not be dead after all. Dean has to convince Kevin not to go searching for his mother (hence the talk of being family and that Dean and Sam would die for Kevin).

In other words, to recap: “Devil May Care” begins and ends with Sam not knowing he’s got an angel sharing his body. Abaddon starts out wanting to depose Crowley as King of Hell, an ambition she still has when the episode closes.Crowley remains in the custody of the Winchesters.

Chau is very sympathetic as Kevin, Sheppard is enjoyably sardonic as Crowley and Huffman is a becoming mixture of seduction and sadism as the ambitious Abaddon.

The episode bounces along pleasantly, with plenty of demonic, angelic and human action (plus a bit of vampirism in there for good measure), and again, Padalecki is very entertaining in angel mode, but “Devil May Care” feels much more like a place holder than an hour possessing great forward momentum.