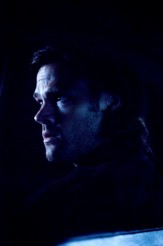 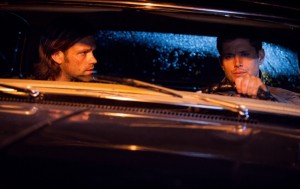 Just in case any SUPERNATURAL fans were worried, rest assured that Season 9 gets off to a crazier than a bag of WINNIE THE POOH heffalumps and woozles, with Sam (Jared Padalecki), Dean (Jensen Ackles) and Castiel (Misha Collins) all having their own separate bizarre adventures. And wow, is Sam going to be angry (and – oh nooooo – probably sulky) when he finds out what Dean did to save him this time.

In reality, Sam is dying in a hospital, where Dean prays for help. Since God hasn’t shown up yet, Dean prays to Castiel, unaware that Castiel has lost his grace and is for all intents and purposes human. When Cass doesn’t do anything, Dean prays to any listening angel, offering his help in exchange for Sam’s salvation.

Sam, meanwhile, is trapped in his own head. He quickly realizes that the version of Dean he’s arguing with is actually the part of himself that wants to live, while the Bobby (Jim Beaver) who appears to him is the part that wants to pass away.

A number of angels hear Dean’s plea. One shows up and promptly attempts to mug Dean, but this angel is killed by another, Ezekiel (Tahmoh Penikett), who says he really does want to help. Castiel briefly gets through by phone and says Ezekiel is trustworthy.

Cass is having problems of his own. He finds an angel called Hale (Grace Phipps), who initially seems just to need a pep talk. However, it soon comes out that what she really wants is to inhabit Castiel’s vessel. She tells Castiel that most of the other angels want to kill him for getting them all thrown out of Heaven (even though Cass was tricked into this by Metatron). Cass gets the drop on Hale and stabs her, then discovers that he would rather use his laundry quarters to get a snack than to clean the blood out of his clothes.

Back in Sam’s head, Bobby leads Sam to a cabin. Dream-Dean kills dream-Bobby, but Sam makes dream-Dean evaporate. When he enters the cabin, Death (Julian Richings) is there.

Back in the hospital, Dean has to deal with a few more invading angels. Sam is dying and Ezekiel says there are no good ways of saving him. Dean asks for the bad ways. Ezekiel says that he can possess Sam until both are stronger. Dean at first says no, then considers it. Sam won’t agree to it anyway – if it’s Ezekiel. If it seems to be Dean offering to help Sam, however …

In Sam’s head, he pleads with Death to make it final this time. Death says he can promise that, but then Dean shows up, pleading with Sam to “let him in.” Sam agrees – and Dean turns into Ezekiel.

Ezekiel has fixed it so that Sam won’t know he’s there and won’t remember being possessed. Sam wakes up in the car next to Dean, feeling better.

You got all that? Put another way, Sam once more ponders whether he’d rather live or die, we get to see Bobby again, Dean once more gets beaten bloody, actor Collins strips down to his skivvies in the laundry scene and Padalecki gets to play a stoic angel when Ezekiel has taken possession but not subsided into Sam yet.

In other words, from the opening montage, set this time to “Who Do You Love?”, an aptly badass tune, through the end of the episode, we get brotherly angst, violence, dangerous otherworldly bargains – and a reminder that King of Hell Crowley is still in the trunk of Dean’s car (though we don’t actually see him this time around). It’s all deranged and swell in that special SUPERNATURAL way. Welcome back, boys.