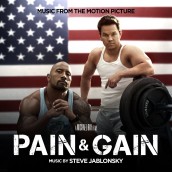 Steve Jablonsky satirically pumps it up for his best Bay score

Michael Bay’s career has been based on brain-frying excess, mainlining images of sweaty biceps, barely-fitting bikinis and joyful violence upon the popcorn eating masses. In the process, he’s encouraged his composers to pump the volume to 11 with rampaging walls of muscular rock-fueled orchestras. But where Bay has often been righteously lambasted for being lame-brained in his stylistic choices, the multiplex king now reveals his over-the-top fetishes as the ultimate act of artistic subversion as he plays the amped energy of murderous adrenalin junkies in PAIN & GAIN and in the process encourages his musical confidant Steve Jablonsky to deliver his most interesting, and dare I say intellectual score done for the filmmaker.

PUMPING IRON by way of FARGO best describes this comedy of appalling errors. But rather than outrightly going for humor, Jablonsky mostly hears the optimistic groove inside of its deluded weightlifters’ heads. Eschewing an orchestra for this score’s GAIN, Jablonsky ultra-cool rhythmic melange is like the greatest mash-up ever of Harold Faltermeyer, Giorgio Moroder, U2 and Tangerine Dream, capturing the latter’s ethereal, percussive vibe that made such an impression when Tom Cruise went rogue to capture the American Dream in RISKY BUSINESS. Except here it involves kidnapping and killing, giving Jablonsky’s vibe a distinctly dark undercurrent for all of its seeming brightness. Better yet, Jablonsky gives PAIN’s electro-rock patter a distinctly “off” quality to reflect the increasing amount of drugs its deluded characters inhale and inject- until by the end the joy juice is nearly sucked out of the score, resulting in a wash of creepily grooving music that befits the nasty, true-crime story that PAIN & GAIN truly is.

While he knows the moves for Bay’s giant killer robots, it’s deadly human idiots that have given Jablonsky his smartest score yet. At once rhythmically rolling down its characters’ sweaty abs while playing the blackness underneath it, “Groove” brings out a whole new level of interesting propulsion for Jablonsky, all in terrific retro service of a director who fully shows he’s anything but a dunderhead with a joyously sadistic he-bitch slap that’s full of sweet musical PAIN.

Clink on the link to Purchase the Pain & Gain soundtrack