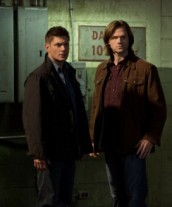 In Greek mythology, the Titans preceded the gods. Most of the Titans were pretty brutal, but Prometheus is credited with giving mankind fire. In consequence, Zeus, king of the gods, chained Prometheus to a cliff so that he could have his liver torn out every day, then revive and go through it all over again.

SUPERNATURAL puts its own spin on this by having Sam (Jared Padalecki) and Dean (Jensen Ackles) investigate what at first seems to be a zombie rising. However, the fellow in question, who calls himself Shane (John Reardon), seems normal enough – except for the fact that he dies every day and can’t remember what happened before he was dug out of an avalanche about seven years earlier.

While Sam and Dean are trying to figure out how to help “Shane,” whom they deduce is cursed, the amnesiac is visited by a beautiful woman (Anna Van Hooft) who seems upset Shane doesn’t recognize her. The two wind up in a martial arts fight, with Shane holding his own remarkably well. The woman vanishes.

Sam knows enough via his research to surmise that Shane is actually Prometheus, which means that his visitor was Artemis, goddess of the hunt and daughter of Zeus, who is probably seeking his lost prisoner. Meanwhile, another woman turns up at the motel door – this is Hayley (Brooke Langton), who knew Shane after the avalanche and has her and Shane’s seven-year-old son Oliver (Callum Seagram Airlie) in tow. In the months since he’s turned seven, Oliver has inherited his father’s dying-once-a-day curse and stopped speaking.

In an effort to break the curse on Prometheus and Oliver, Dean and Sam whip up a god trap and summon Zeus (John Novak). Zeus is still angry at Prometheus for giving fire to humankind (even though Prometheus can’t remember doing it). As the situation escalates, Zeus begins torturing Prometheus, temporarily kills Oliver, and Artemis takes Sam and Dean away to kill them. Sam puts two and two together, realizes that it can’t really have taken the Goddess of the Hunt this long to hunt down Prometheus unless she didn’t want to, and from there concludes that Artemis and Prometheus had an affair. He tells Artemis that Prometheus said he loved her, which persuades Artemis to try to rescue Prometheus. Artemis feels that Zeus has changed beyond recognition and tries shooting him with her anti-immortality arrow. Unfortunately, Zeus uses Prometheus as a shield, but Prometheus pulls the arrow through his own body, fatally stabbing Zeus with it as well. Oliver is now able to speak.

Sam, however, goes through a crisis of confidence, worrying that he won’t be able to complete the trials to close the gates of Hell after all. Dean gives him a pep talk, saying that Sam will die of something normal. What Dean doesn’t know, but we do, is that Sam is spitting up blood with his morning glass of water, so he may in fact have a fatal disease. Alone, Dean offers a heartfelt prayer to Cass to watch over Sam, but gets no response.

“Remember the Titans” gets a lot of credit for coming up with a solid plotline where we can’t immediately guess where it’s all going. The dying every day curse is intriguing, though Zeus’ take on it is that so long as you come back, it’s a big like just taking a nap. (Given some of the other stuff that happens on SUPERNATURAL, we’re inclined to agree with him, at least in the context of the show’s universe.) Novak has a great Olympian swagger to his performance, although his role is comparatively brief, and there’s a lot of fun in Sam and Dean’s reactions to events.

Even though this is well-trod turf by now, Dean’s concern for Sam is touching and Sam’s unspoken unease about his own condition likewise invites empathy. In terms of both creativity and the Winchester bond, “Remember the Titans” shows there’s plenty of natural life here yet.